On MSNBC’s Morning Joe today, Steven Rattner examined the surprising rise of Sanders and corresponding decline of support for Warren in the 2020 polls – two Presidential hopefuls that share similar policy beliefs but with differing degrees of progressivism.

Bernie Sanders’ rise in 2020 public opinion polls has nearly mirrored Elizabeth Warren’s fall. That’s not a coincidence, although it’s not particularly logical as Sanders’s positions are even further to the left than Warren’s. 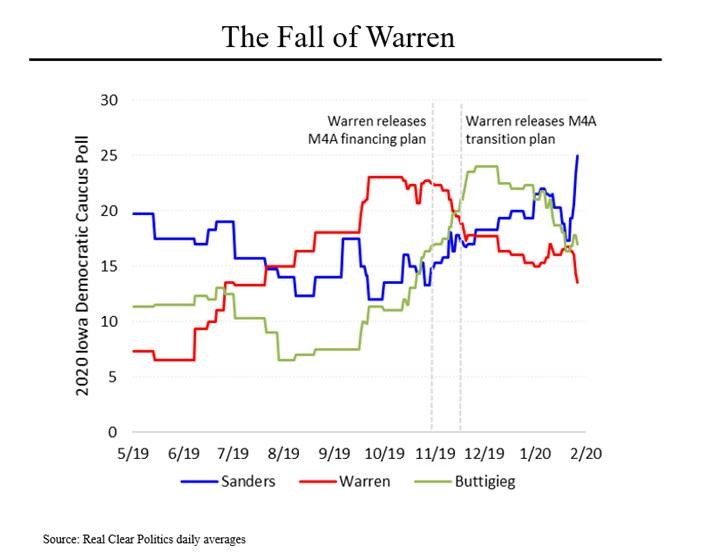 While many factors go into electoral popularity, Warren’s decline can be fairly traced to her decision at the beginning of November to lay out the revenue and cost assumptions behind her version of Medicare for All. The public reaction to the more than $20 trillion that would be added to the federal budget over a decade was highly negative, which also served as a reminder that approximately 160 million Americans would be forced off of their employer-based private insurance and onto the government plan.

As this chart shows, before she unveiled the details of her plan, her standing in Iowa polls had been steadily rising, reaching about 23% in the middle of last October and holding there. Almost immediately after the release, her popularity in Iowa began to fall. Just two weeks later, she pivoted and substituted a new plans that would provide for a longer transition to Medicare for All. But that switch has done little to help her; her standing in Iowa (and across the country) has mostly continued to decline. Another useful data point: Before her tumble, Warren had (perhaps surprisingly) the support of 20% of Democrats who self-identified themselves as moderates; by late November she had just 5% support among this group. 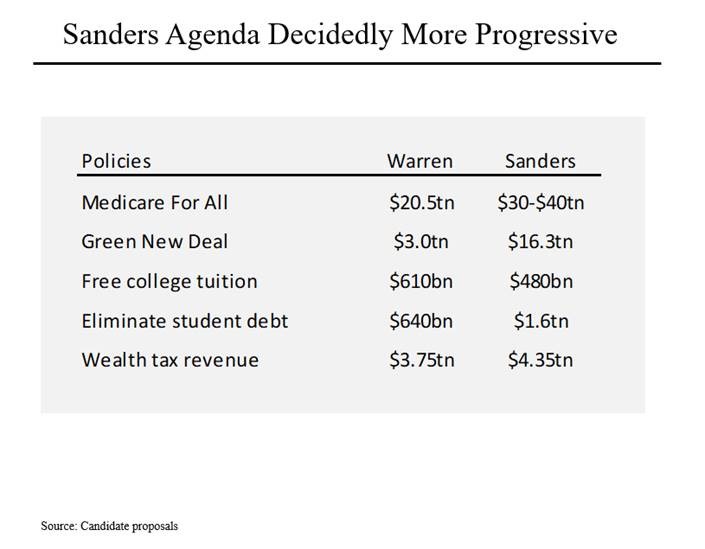 But the shift among progressives from Warren to Sanders doesn’t make much sense from a policy perspective. While the two senators are often lumped together, a careful inspection of their positions makes clear that Sanders is materially more progressive than Warren. For example, his Medicare for All plan – which would end private insurance – would be far more expansive than hers, costing between $30 trillion and $40 trillion over the next 10 years (by his own estimates), compared to Warren’s estimate of $20.5 trillion (although some experts believe that figure is low). Similarly, implementing the Green New Deal would be vastly more costly under a President Sanders who is proposing a more aggressive plan than Warren. While the two candidates are in a similar place on free college tuition, Mr. Sanders’ plan for eliminating all student debt would clock in at $1.6 trillion while Warren doesn’t even support wiping out all that debt. Lastly, Warren has gotten a huge amount of attention (and pushback) for her proposed wealth tax, but Mr. Sanders would impose an even steeper wealth tax on the richest Americans. 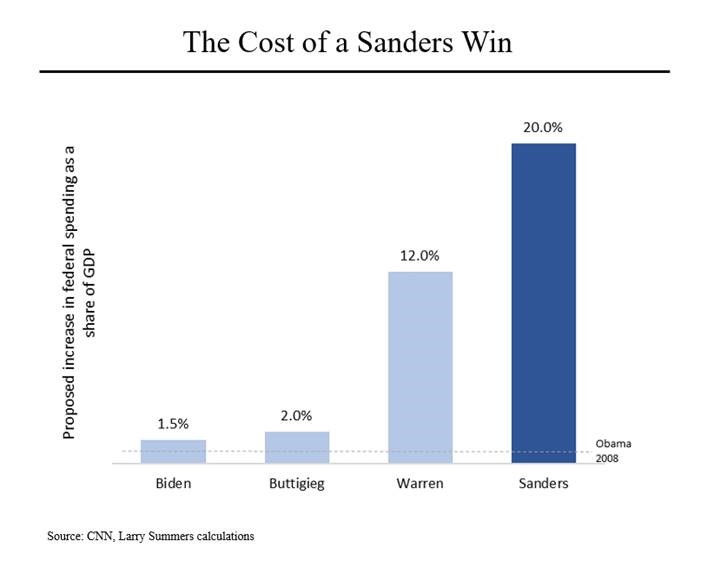 All told, Sanders’ proposals would add substantially more to federal spending, according to calculations by former Treasury secretary Lawrence Summers. While centrist candidates Joe Biden and Pete Buttigieg would only increase federal outlays by 2 percentage points or less (as a share of the overall economy), Warren would raise them by 12 percentage points while Sanders would add a whopping 20 percentage points. (By comparison, even at the height of the financial crisis in 2008, Barack Obama only proposed a 1 percentage point increase and previous Democratic nominees Hillary Clinton and John Kerry proposed even less during their respective 2016 and 2004 campaigns.)

So why have Democratic voters ignored these facts? Principally because Sanders has not been subjected to the same scrutiny as Warren. That’s partly because he has not laid out his proposals in as much detail as she has and partly, perhaps, because most commentators and analysts did not believe he had a big enough chance of becoming the nominee to dissect his ideas as thoroughly. Perhaps that may now change.