On MSNBC’s Morning Joe today, Steven Rattner presented charts explaining how the escalating trade war has taken a toll on the manufacturing sector and continues to weigh heavily on investment spending.

Following disappointing new economic data and the imposition of still more tariffs on China over the weekend, the stock marked wobbled on Tuesday, leaving it 4% below the record high it reached on July 26. Whether the United States is headed into recession remains an open question but without doubt, President Trump’s trade war has inflicted serious damage on the American economy – as well as that of other major countries. 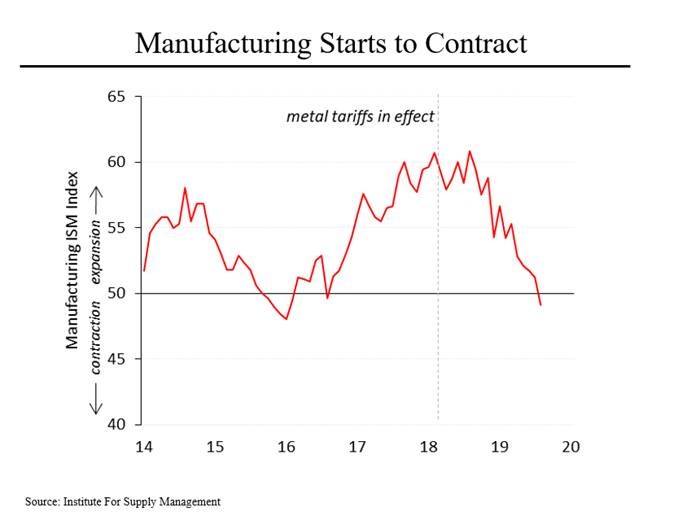 The big news on Tuesday was that manufacturing contracted in August for the first time since 2016. That shouldn’t have been entirely surprising as the index has been falling almost since Mr. Trump began imposing tariffs in March 2018. While the initial round of tariffs (on aluminum and steel) “only” caused the index to wobble, the broader levies that began in July 2018 triggered its steady slide. Although manufacturing only makes up about 11% of the U.S. economy, it was the sector on which Mr. Trump focused his “Make America Great Again” campaign slogan. Moreover, entrenched weakness in manufacturing could filter through to the rest of the economy and endanger the longest recovery in post-war American history. 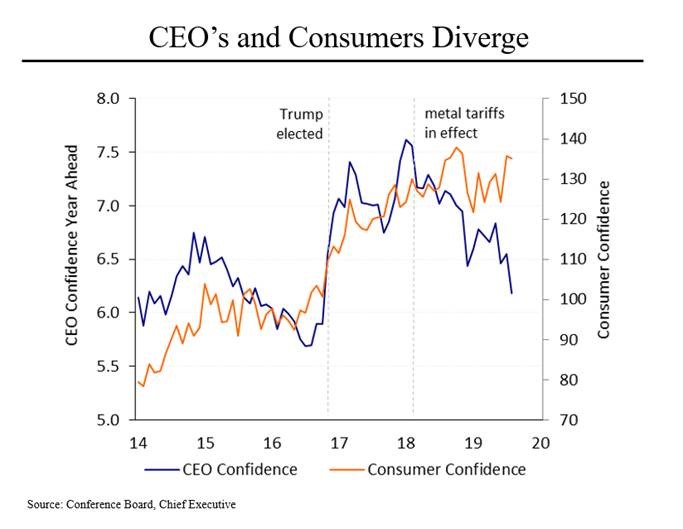 Interestingly, the attitudes of businessmen and consumers rose in lockstep after the election of Mr. Trump in November 2016 but then began to diverge significantly right around the time when he began his trade war. Since then, business confidence (as measured by a survey of chief executive officers) has fallen sharply, while consumer confidence has remained steady. In the August survey of CEO’s, 62% said the trade war is becoming “highly detrimental” to their outlook and strategy. An even larger percentage (72%) said they did not believe that the Federal Reserve’s switch to cutting interest rates will succeed in sustaining the economic cycle much longer.

Their recent strong spending notwithstanding, consumers may be catching on. One just-released August figure showed a significant drop. 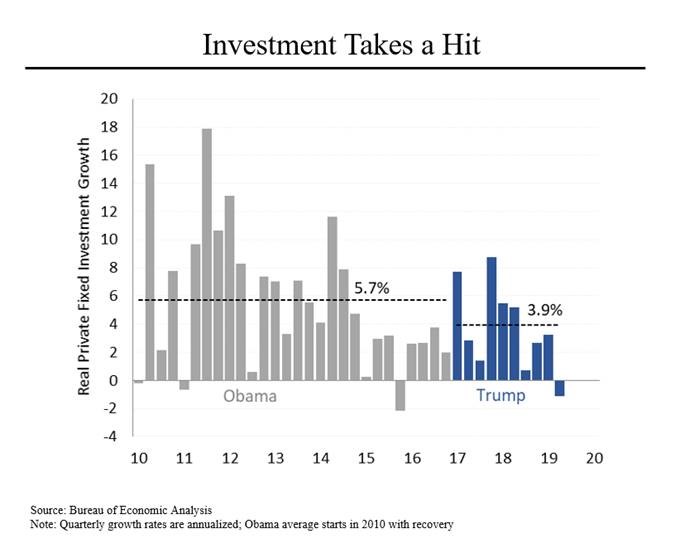 The business community is not only expressing concerns; companies are cutting back on their investments, another key objective of the Trump administration. In fact, during the second quarter, new investment fell for the first time since the fourth quarter of 2015. As the 2020 election season continues to unfold, Americans may be surprised to learn that the rate of investment under Mr. Trump – 3.9% — is actually lower than under President Obama (5.7%) after the nation’s economy began to recover in 2010.

Here’s one small example: In July, sales of heavy trucks were down 80% from the same period last year. The slowdown in the economy has led to substantial overcapacity in the trucking industry and caused freight rates to crumble.

While investment is only one component of our gross domestic product, its slowdown is contributing to a ratcheting down of expectations for overall growth JPMorgan now projects that the economy will grow at a rate of less than 2% for the foreseeable future. That may well prove to be optimistic.