A Better Way to Tax the Rich

Kudos to our latest political supernova, Alexandria Ocasio-Cortez, for helpfully bringing taxes back into focus, with her call for a new top tax rate of 70 percent on incomes above $10 million a year.

That seemingly simple concept makes for a great headline, but it’s not great tax policy. While I’m all for raising taxes on the wealthy (in large part because we need to deal with our growing deficit), there are more sensible ways to do it.

For starters, Ms. Ocasio-Cortez seems to be ignoring the burden of state and local taxes, particularly for residents of places like her hometown. For us New Yorkers, the top rate for those levies is 12.7 percent. And thanks to the 2017 Republican tax cut, it is no longer deductible, bringing her proposed top rate to 82.7 percent.

There are other, better ways to raise revenue — in particular, by increasing the tax rate on capital gains and dividends and closing loopholes.

At present, a beneficiary of long-term capital gains or dividends pays 23.8 percent of the profit to Washington. That’s already a good bit less than the 37 percent top rate on so-called ordinary income.

Among the justifications for taxing profits on capital at a lower rate than income from work has historically been that companies pay taxes on their profits, so taxing shareholders on their gains represents a form of double taxation.

But the 2017 tax cut legislation reduced the tax rate on corporate profits to 21 percent, from 35 percent. So if taxes on capital gains and dividends were raised by those 14 percentage points, we capitalists would be no worse off — and American companies would still be more competitive globally, the theory behind reducing the corporate tax rate.

Evaluating the revenue raised by any of these proposals is a murky exercise. Any big increase in tax rates would lead Americans to try to game the system by changing their behavior. Nevertheless, an expert at the Tax Policy Center told me that Ms. Ocasio-Cortez’s proposal could raise around $300 billion over 10 years.

But while raising those tax rates closer to those on ordinary income would make the system fairer, other changes would be required to prevent owners of appreciated assets from avoiding their tax obligations. For example, the United States should eliminate the provision that forgives unpaid capital gains taxes on assets held at death.

And there are many loopholes that could be closed in the name of greater equity. In 2016, the Obama administration provided a helpful list of candidates: They range from jettisoning the special deductions and credits that producers of fossil fuels enjoy to eliminating the notorious carried interest provision, which allows private equity managers (including me) to pay the lower capital gains rate on what is effectively ordinary income. Of course, if capital gains were taxed as ordinary income, that problem goes away.

Another fruitful area for loophole-closing is the provisions that allow many real estate guys (including President Trump) to pay little, if any tax. For example, while the 2017 tax bill eliminated the rule allowing owners of most appreciated assets to avoid tax by exchanging them for other comparable assets, that loophole was left in place for owners of real estate. So a landlord who sells one building can avoid paying capital gains taxes on the profits when he uses those profits to buy another investment property. 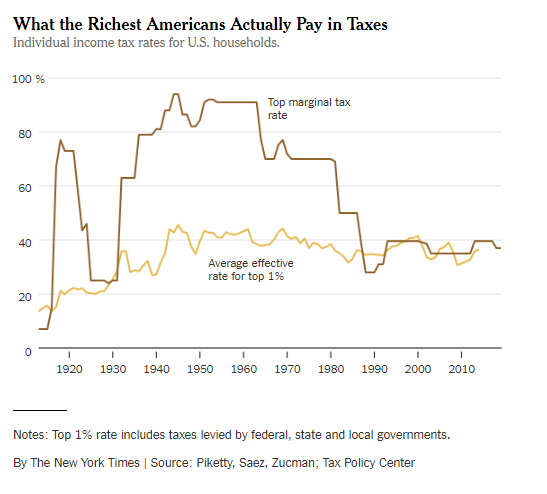 Proponents of huge increases in the top marginal tax rates argue that they were once even higher than 70 percent and applied to lower levels of income. Yes, the “sticker prices” in the past went up to just over 90 percent, but few people actually paid them. Instead, they took advantage of tax shelters and tax- avoidance schemes to keep their bill as low as possible.

In reality, the average percentage of income paid by Americans in the top 1 percent has remained remarkably stable over the last eight decades. I’m not opposed to a reasonable increase in the top marginal rate, but when it comes to getting the richest Americans to pay more, there are much better ideas than Ms. Ocasio-Cortez’s plan.