Steve Rattner’s Morning Joe Charts: The Fed Still Has Work to Do

As expected, the Federal Reserve raised its benchmark interest rate by 0.75% on Wednesday, to a range of 3% to 3.25% in order to continue to battle stubbornly high inflation and offered a sober outlook for future rates increases. As recently as March of this year, the Fed’s base rate (known as the “federal funds rate”) was effectively near zero. Not surprisingly, yesterday’s stock market indices quickly dropped by about 1.7% (and interest rates on longer-term Treasuries fell modestly). As part of its announcement, the Fed released new, slightly more pessimistic economic projections. 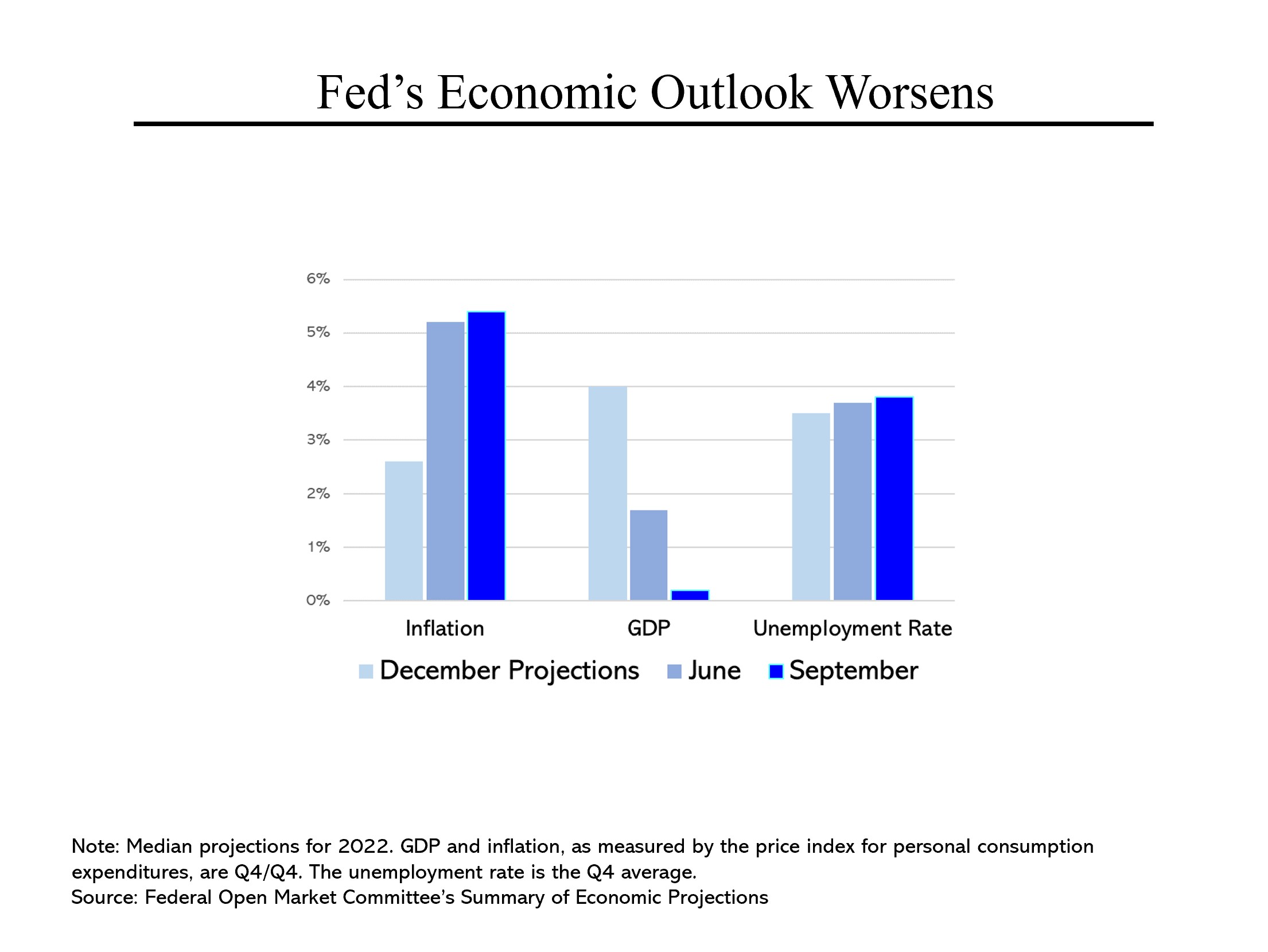 The principal motivation behind the Fed’s action was the need to curb rising prices. Over the past nine months, the central bank’s projected inflation for this year has risen from 2.6% to 5.4%. (Note that the Fed uses a different price measure than the Consumer Price Index, which is currently running above 8%.) The challenge for the Fed is that it is raising rates just as the outlook for the economy is deteriorating. The new projections suggest that when the dust settles on 2022, the U.S. economy will have barely grown. (Last December, the Fed expected the economy to expand by 4.0% this year.) Relatedly, unemployment is now expected to reach 3.8% by yearend, compared to 3.7% at present.

The big question, not addressed by the new numbers or by Fed chair Jerome Powell at his press conference, was whether the rate increase coupled with the deteriorating economic outlook meant that the economy was headed for a recession. While not ruling out a recession, Powell danced around the question, even as many economists believe a downturn is inevitable if inflation is to be curbed. 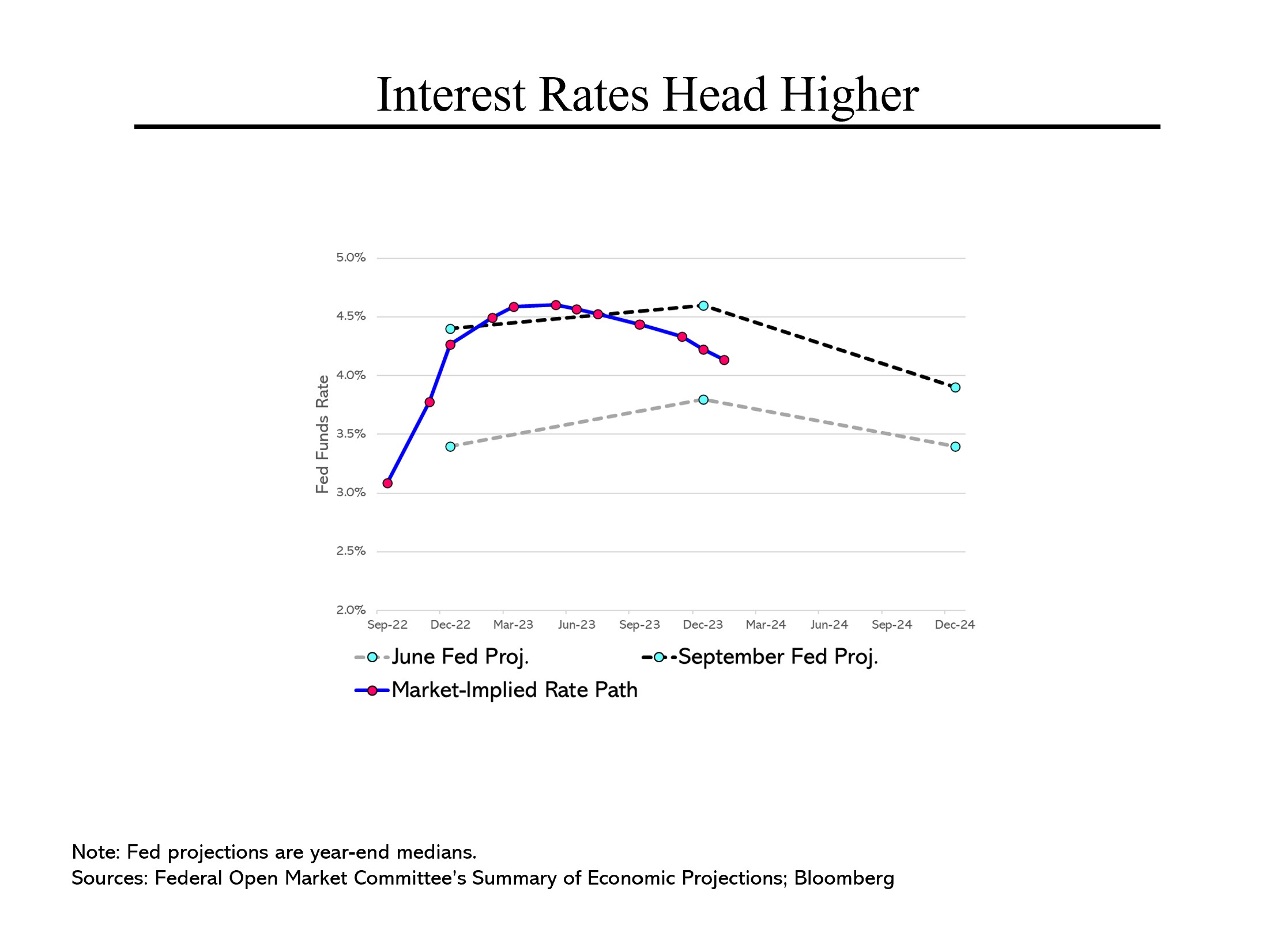 Wednesday’s interest rate increase is unlikely to be the last. The Fed now believes that its benchmark rate will peak at around 4.6% at the end of next year, substantially higher than at present, before declining into 2024. That represents a substantially more pessimistic view of the future course of rates than the Fed’s view just three months ago. While the Fed does not directly control other rates, its actions influence them – mortgage rates are now above 6%, compared to a low of 2.65% in January 2021.

Interestingly, the credit markets are slightly more pessimistic in the short run but then expect rates to peak well before the Fed’s expectation. By the end of next year, the market thinks rates will have fallen from that peak to just over 4%. 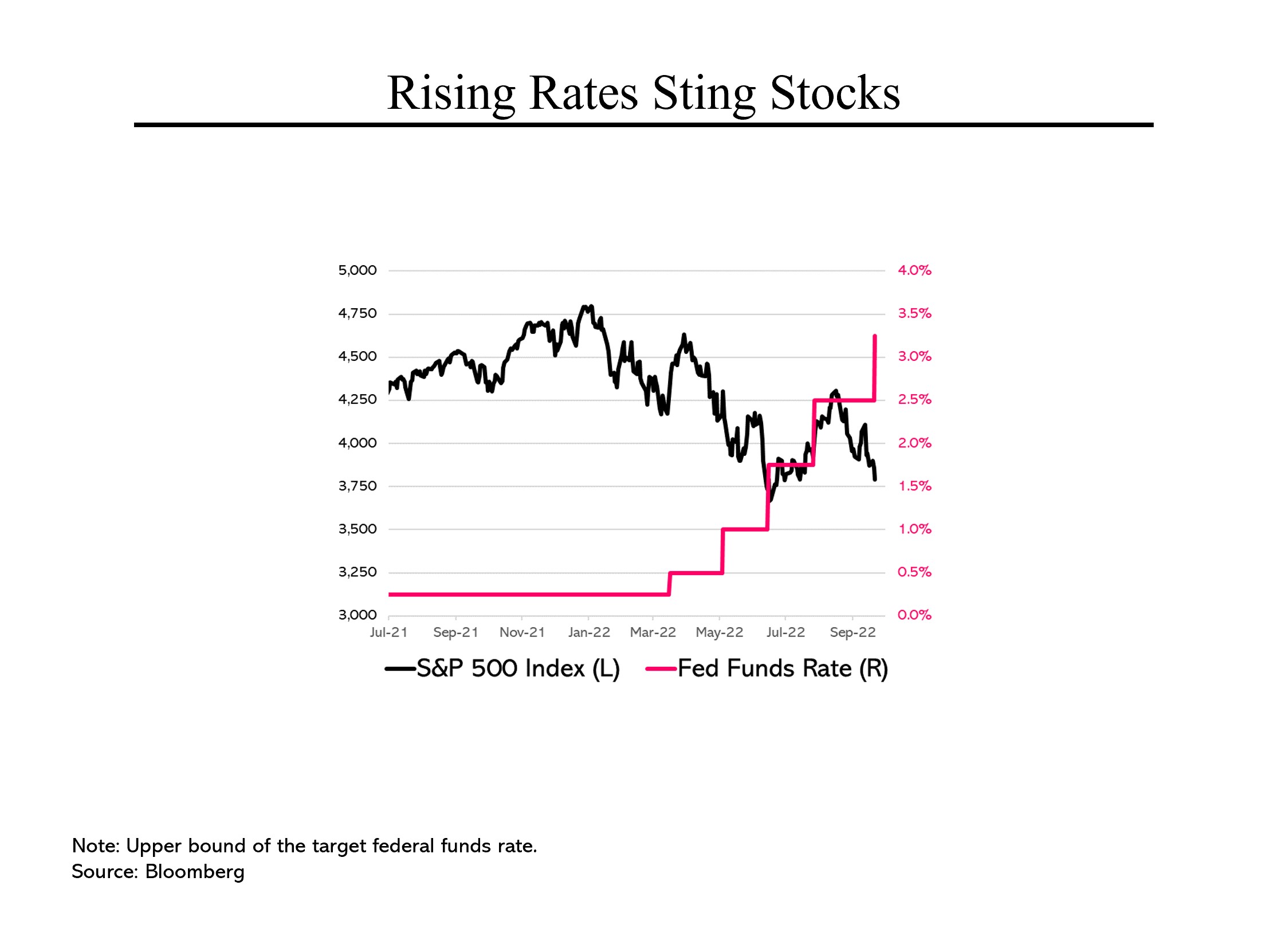 “Don’t fight the Fed” goes an old Wall Street adage, meaning that rising interest rates are the enemy of stock prices. Higher returns on Treasuries and other credit instruments provide investors with a more attractive place to put their money. Indeed, that has been the recent course of rates and stock prices. As the Fed cut interest rates to near zero during the pandemic, stock prices soared. Since it started raising rates six months ago, stock prices have shuddered and fallen, as they did yesterday. (Note the mini rally over the summer, when the market briefly interpreted remarks by Powell to suggest that the tightening cycle might be shorter than expected.) All told, the benchmark S&P 500 index is now down just over 20% from its peak, which, coincidentally, was right at the start of 2022.