On MSNBC’s Morning Joe today, Steven Rattner explained why the federal minimum wage needs to be increased but also why politics makes the fight for $15 an hour so messy.

The decision by the Senate parliamentarian that a minimum wage increase cannot be part of the $1.9 trillion stimulus package has set off intense efforts by Democrats to find a way to help the millions of Americans working in very low-wage jobs. But now an increase will require the support of 60 Senators; Republicans (and a handful of moderate Democrats) remain opposed to the Biden proposal for a gradual increase to $15 an hour. 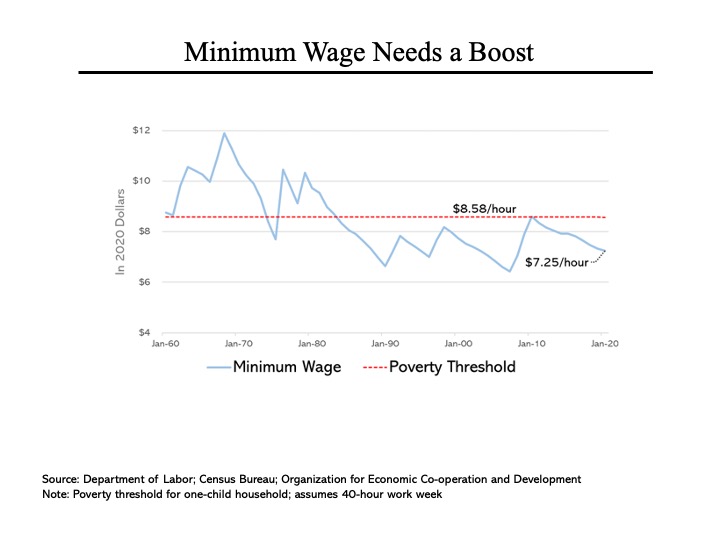 The arguments for an increase are compelling. The minimum wage was last raised in 2010 (the longest period without an increase since it was established in 1938) and since then, even our modest inflation rate has eroded its purchasing power. Back in the 1960s and 1970s, we had a minimum wage that – while modest – at least provided an income above the poverty line (for a family of three, with one working parent). But starting in the early 1980s, the “real” value was allowed to drift down, and today only provides a yearly income of $15,080 (assuming a 40-hour work week).

One other point: Contrary to popular impression, the workers near the bottom are not Amazon or Target employees; those companies pay all workers at least $15 an hour. The jobs that pay the least include childcare workers, housekeepers and dishwashers. Also, small employers tend to pay less than large ones, adding to the political tensions. 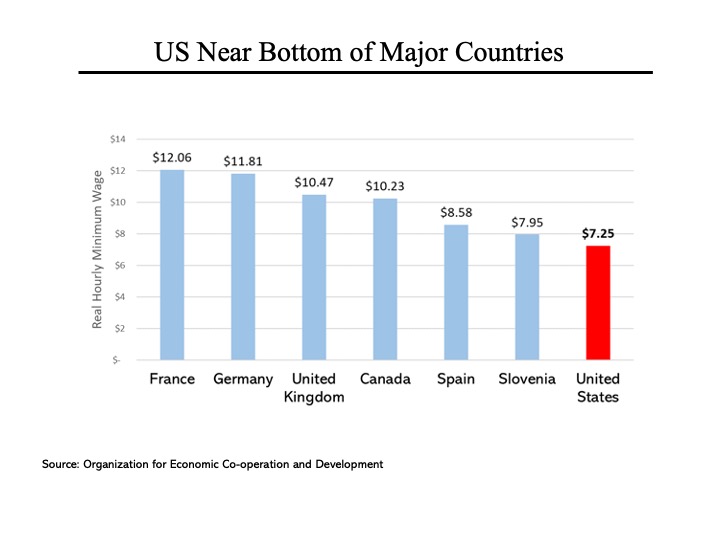 Another depressing way to look at this is in comparison to other major countries. France, Germany, and the United Kingdom all have substantially higher minimum wages, even though average earnings in those countries are lower in the United States. Among OECD countries for which data is available, the country right above us in the league tables is……Slovenia! 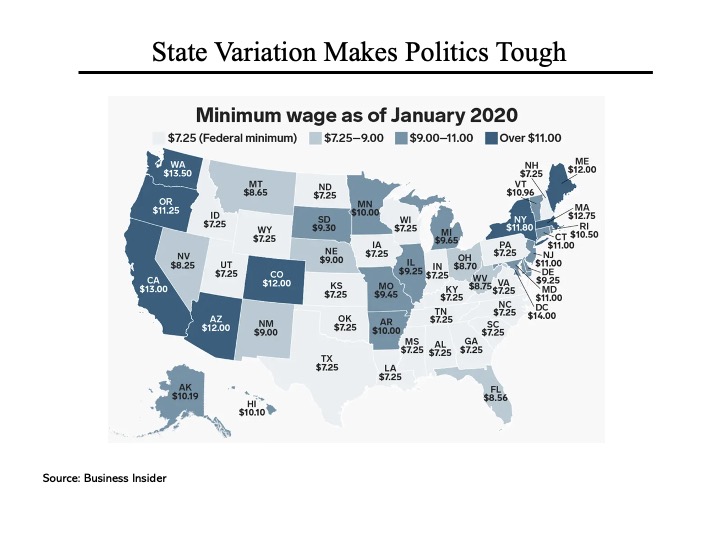 Part of why the politics of the minimum wage are so tough is because many states and cities (particularly – but not exclusively – blue ones) already have substantially higher minimum wages. California is at $13 per hour, Massachusetts is at $13.50 (up from $12.75 a year ago) and New York is at $12.50 (increased from $11.80 last year). At the city level, Seattle is at $16.69 an hour while New York City is at $15. Meanwhile, many red states (including Texas, Georgia and North Carolina) have minimum wage levels that just match the federal rate so it’s hardly surprising that their legislators are unenthusiastic about the Biden proposal. Nonetheless, some Republicans, including Mitt Romney and Tom Cotton, have proposed an increase to $10 an hour (although they are coupling with a requirement for employers to E-Verify to curtail the hiring of undocumented immigrants).