On MSNBC’s Morning Joe today, Steven Rattner presented charts laying out a growing view among investors that a Biden win or even better, a democratic sweep, would yield a stronger economy and stock market than a Trump re-election.

Wall Street is usually thought of as generally believing that Republicans are better for the economy than Democrats but at least this time around, a number of investment firms have suggested that a Democratic takeover would lead to more growth and more jobs and even higher stock prices.

Moody’s Analytics, for example, calculates that a win by Joe Biden, combined with Democrats achieving a majority in the Senate and retaining its majority in the House, would result in average annual gross domestic product growth over the next four years of 4.2%. That’s because Biden’s plans for stimulating the economy are far more robust than Donald Trump’s and with control of both houses of Congress, he is likely to be able to effect many of them.

Even if the Republicans retain the Senate, Moody’s still expects a Biden presidency to achieve faster growth (3.5%). A Trump victory with a split Congress clocks in at 3.2% annual expansion and interestingly, a Republican sweep would likely result in the slowest growth (3.1% per year).

Faster growth means more jobs. This chart shows projected payroll totals under the same four scenarios. The difference is stark. By 2024, a Biden presidency combined with a Democratic controlled Congress would produce roughly 7.4 million more jobs than if Trump retains the White House and gains full control of Congress. Indeed, by these projections, if Trump is reelected, the total number of jobs would likely not get back to pre-pandemic levels before Trump’s second term ends.

Not surprisingly, the unemployment rate would be higher under Trump: 4.8% at the end of four years (assuming full control) versus 4.0% if the Democrats attain full control. 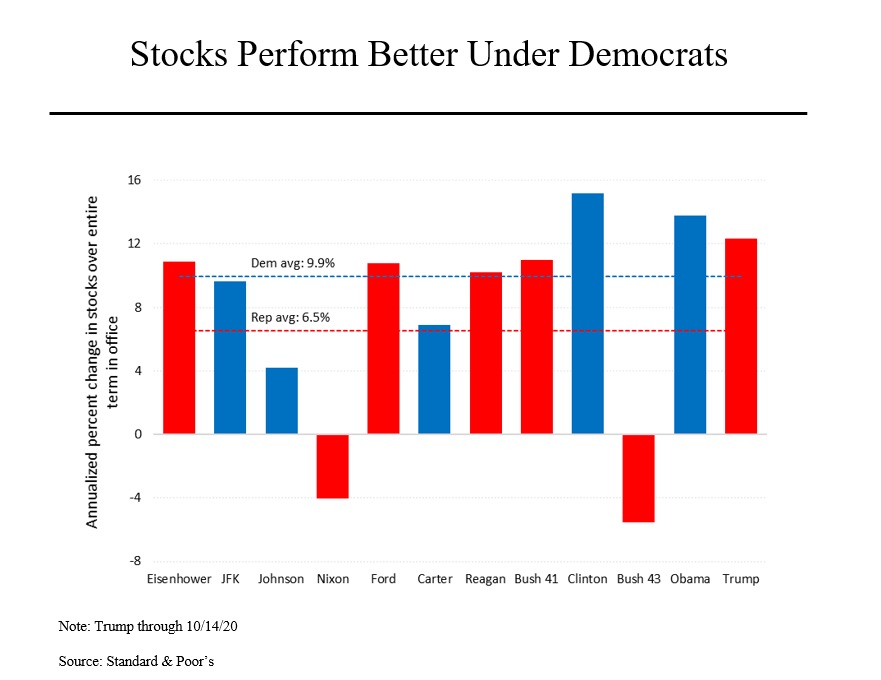 What’s good for the overall economy is often good for the stock market. Goldman Sachs says that companies would earn more under a Biden presidency, even if corporate tax rates are increased. Credit Suisse says the increased spending following a Democratic sweep would be “massively pro-growth.” Perhaps counterintuitively, Democrats, on average, have been better for the stock market than Republicans. From the days of the Eisenhower presidency, stocks have risen by an annual average of 9.9% compared to 6.5% under Republicans.

So while Trump keeps saying that a Biden victory would “crash” the stock market, his stock market record pales next to those of Barack Obama and Bill Clinton (while bettering that of his recent Republican predecessors).