Steven Rattner’s Morning Joe Charts: Money Isn’t Everything, but Democrats Sure are Flush with Cash

On MSNBC’s Morning Joe today, Steven Rattner presented charts showing how Democrats running for office – whether for the White House or a seat in the Senate – have handily outraised their Republican opponents by stunning amounts heading into the final days of the 2020 elections.

New campaign fundraising numbers have just been released, and they are bad news for Republicans. The extraordinary energy on the Democratic side, in both the presidential and Senate arenas, is translating into dollars from donors to many candidates. 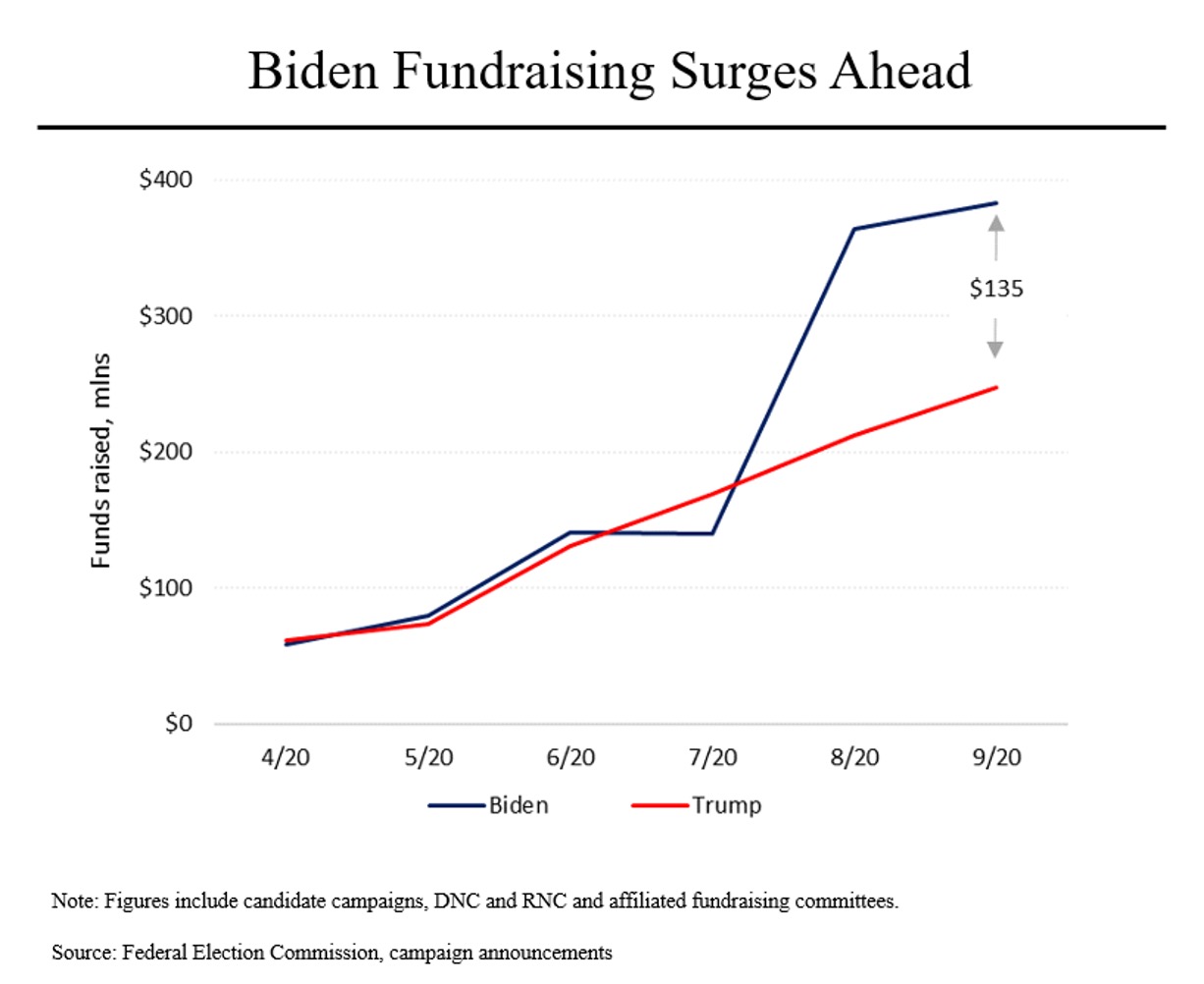 At the presidential level, Vice President Joe Biden massively outraised President Trump for the second consecutive month. In September, Biden raised a remarkable $383 million while Trump’s total was $248 million, $135 million less than Biden’s. Over the past two months, Biden has raised $748 million, almost exactly the same as what Barack Obama raised for his entire 2008 campaign. Much of Biden’s financial success in the past two months can be attributed to his selection of Kamala Harris as his running mate, a successful convention, a winning first debate and the death of Supreme Court Justice Ruth Bader Ginsburg.

As a result, Trump has had to severely curtail his spending, including on advertising. In September, Biden spent $417 million, compared to $323 million for Trump. 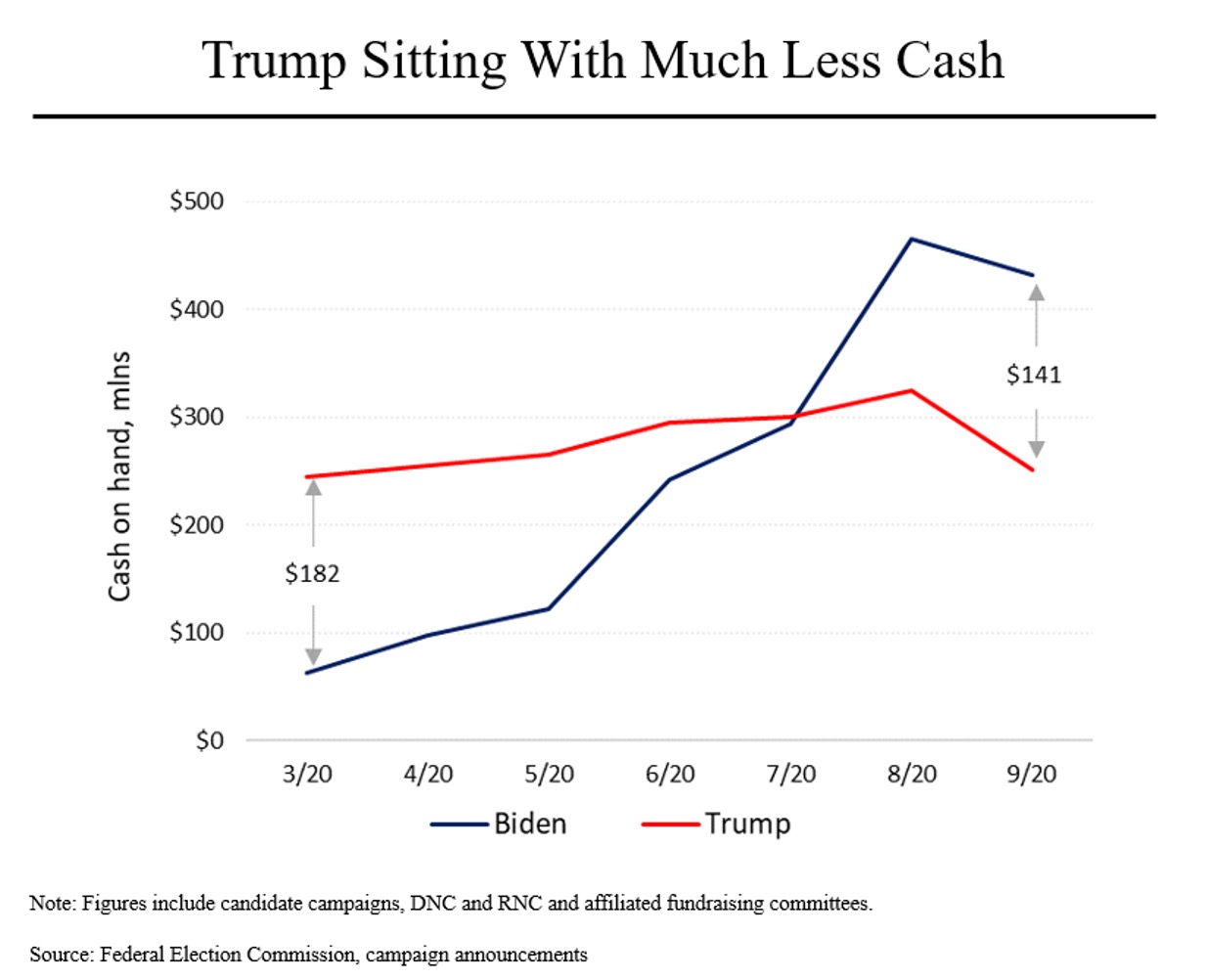 Even after spending less, Trump still had less in the bank at the end of September, $251 million compared to $432 million for Biden. The combination of less robust fundraising and less cash in the bank does not augur well for Trump’s ability to spend competitively in the remaining weeks of the campaign. 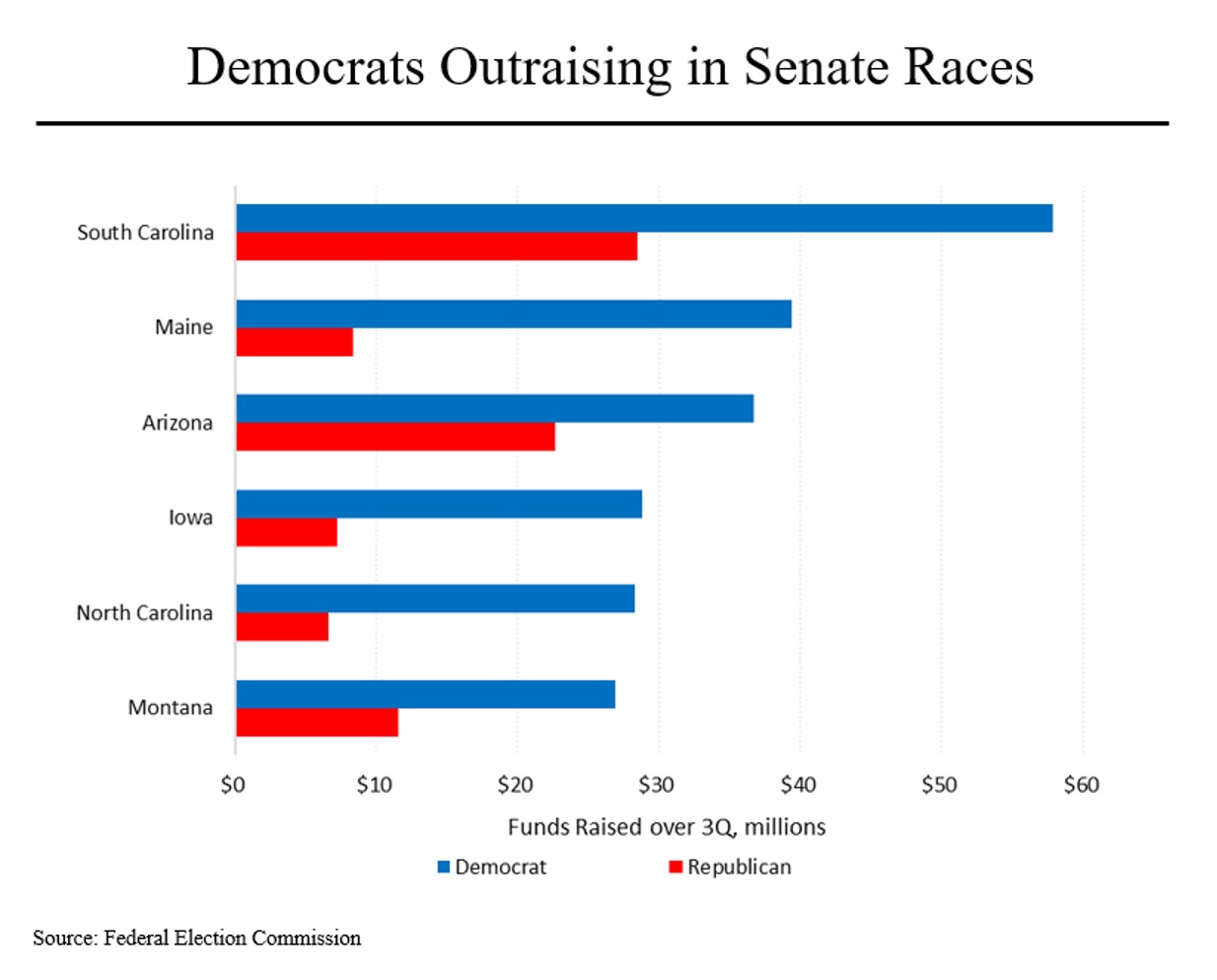 Even more remarkable in some respects has been the fundraising prowess of Democratic Senate candidates. Jamie Harrison, who is challenging longtime senator Lindsay Graham in South Carolina, raised $58 million in the third quarter, the most money every raised by a Senate candidate in a single quarter. That total is almost exactly twice what Graham raised – and Graham’s total was the most ever raised by a sitting Senator. What makes these numbers even more remarkable is that the maximum donation is limited to $2,800.

But money is not everything and Harrison continues to trail Graham in the polls; most experts view Harrison as having an uphill fight.

The totals are smaller in Maine but the disparity is even greater; Sara Gideon, the current speaker of the Maine House of Representatives, raised almost $40 million while incumbent Susan Collins amassed just $8.3 million. In Arizona, former astronaut Mark Kelly did substantially better than incumbent Martha McSally (who has been clinging to Trump). In Iowa, which few believed at the outset would be fertile ground for Democrats, Theresa Greenfield raised almost four times what incumbent Joni Ernst garnered. In North Carolina, where Cal Cunningham is challenging Thom Tillis, the ratio was almost the same. And in Montana, governor Steve Bullock vastly outraised the current junior Senator, Steve Daines.