Steven Rattner’s Morning Joe Charts: It’s Time to Hand the Economy Over to the Democrats

On MSNBC’s Morning Joe today, Steven Rattner presented charts showing that Trump’s rash decision to halt a stimulus deal threatens to derail the recovery and also underscores what a Biden presidency could do for the economy.

With just one intemperate (and inaccurate) tweet string at 2:48pm, President Trump turned an up day for the stock market into a sharp decline. 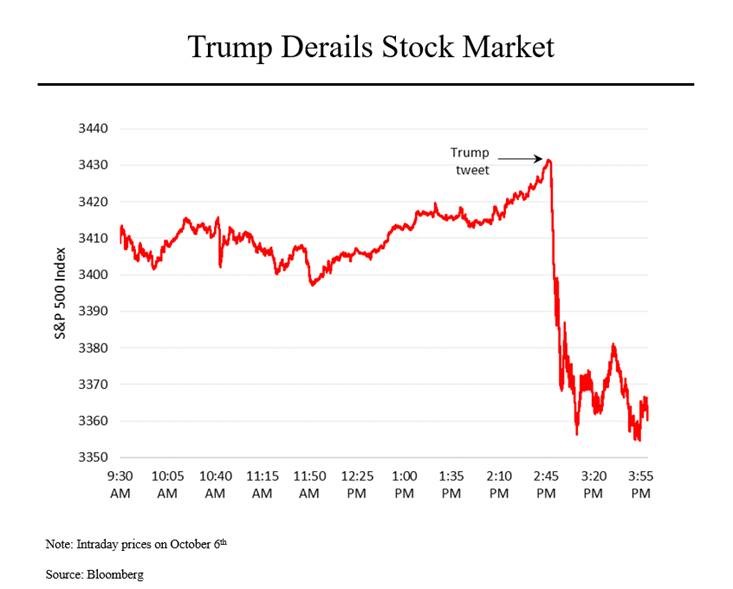 In recent weeks, the stock market has grown increasingly nervous about the state of the economy and was resting its hopes on the possibility of a breakthrough in the stalled stimulus talks between the Democrats and the Republicans. Indeed, the market’s strong day Monday and its even stronger opening Tuesday was spurred in considerable part by reports that prospects had brightened for a deal between the two sides. Then came Mr. Trump’s tweets (which were a startling turnabout from four days ago when he tweeted that the two sides “SHOULD WORK TOGETHER AND GET IT DONE”).

Beyond the overall drop in the market, stocks in the most affected industries were particularly hard hit. Airline shares, for example, were down by around 4% from their intraday levels just before Mr. Trump weighed in. Shares of Boeing, which had earlier said it was lowering long-term estimates for aircraft sales, fell by nearly 7%. Also badly affected were hotel operators like Marriott and retailers like Macy’s. 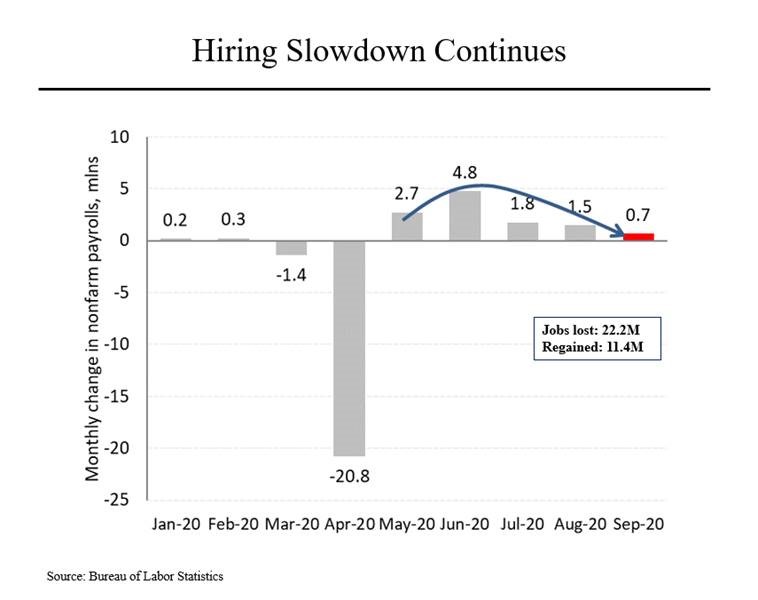 Underlying the market’s concern is the growing evidence that the economic recovery is hardly “V” shaped, as Mr. Trump has been claiming, but is in some danger of stalling out. In the midst of the president’s hospitalization, last Friday’s jobs numbers did not get much attention even though they were quite disappointing. The economy added only 661,000 jobs last month, well below expectations, less than half of what had been added in the prior month and a small fraction of the 4.8 million jobs gained in June. Indeed, more Americans (837,000) filed for unemployment benefits in the most recent single week than were added in the entire month of September.

So the scorecard at the moment is 22.2 million jobs lost and only 11.4 million regained, almost exactly half.

More pain is likely to come. The airlines, which were prohibited from imposing layoffs before October 1 as a condition of receiving aid in the spring, have announced plans for furloughs. American Airlines and United Airlines said they would start laying off a total of 32,000 workers. That’s on top of 150,000 jobs that have already been lost at the airlines. 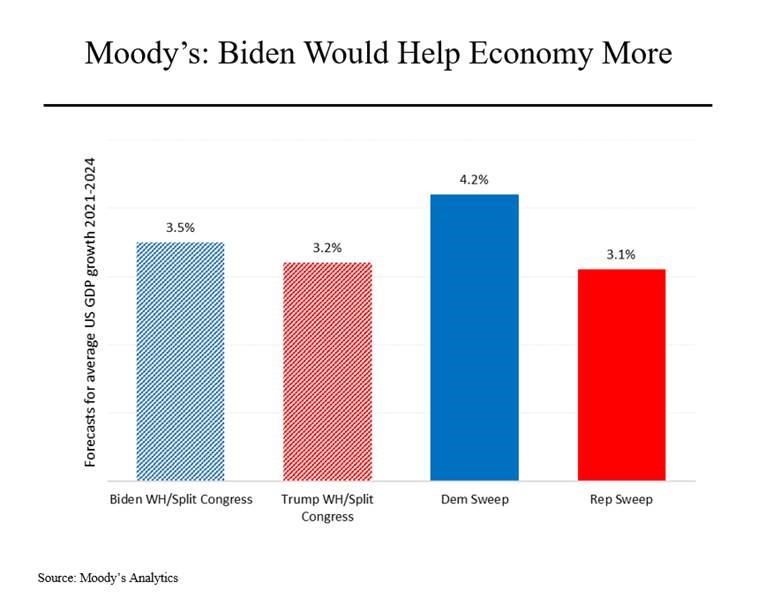 Interestingly, the stock market increasingly appears to be of the view that a Biden win would be better for the economy (and the market) than a Trump reelection. The firm Moody’s Analytics recently released a report estimating that the economy would grow faster over the four years of a Biden first term than under Mr. Trump. Even more interestingly, Moody’s believes that the economy would grow still faster with a Democratic sweep of the White House and the two houses of Congress. That’s because investors are coming around to the view that more muscular action by government is needed to spur growth.

And while Mr. Biden’s economic policy plans are certainly more ambitious than Mr. Trump’s, they may not be any more threatening to our fiscal health than the current president’s. The Committee for a Responsible Federal Budget released an analysis today saying that while both plans would add significantly to the national debt, the magnitude of the increases would likely be similar.