Steven Rattner’s Morning Joe Charts: This is Not a ‘V’-Shaped Recovery

On MSNBC’s Morning Joe today, Steven Rattner debunked Trump’s claims that a ‘V’-shaped recovery is underway. Nor is it “very, very broad based” as claimed by Larry Kudlow.

President Trump and his chief economic adviser, Larry Kudlow, took a victory lap in the White House briefing room on Friday, following the news that the economy added almost 1.4 million jobs in August while the unemployment rate fell to 8.4%. But their proclamations of a “V-shaped recovery” in which the gains are “very, very broad based” were far off the mark. Yes, the economy is coming back from its spring freefall, but no, it’s not “pretty amazing,” as the president claimed. In fact, it is far slower and narrower than its second quarter collapse. 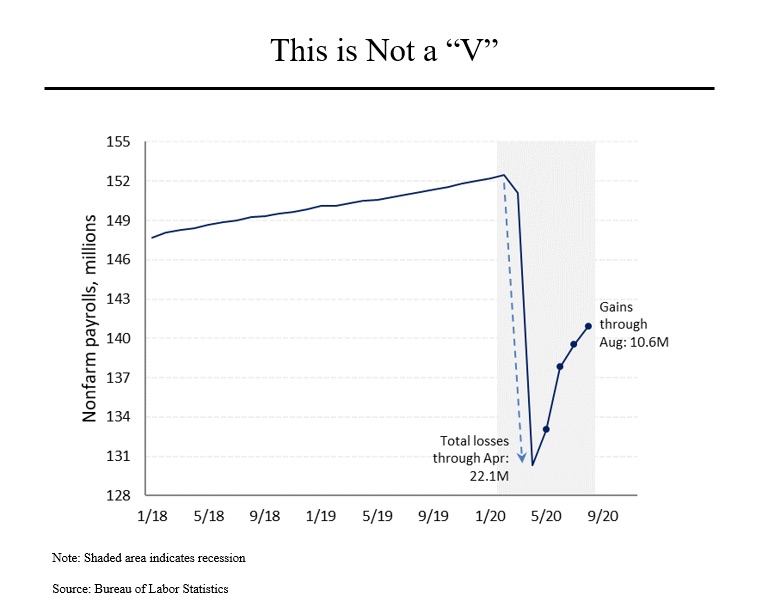 For starters, the job growth that Trump and Kudlow were touting was just a small fraction of the jobs that were lost. In April alone, employment fell by nearly 21 million. In the four months since then, less than half of the lost jobs have been regained. Even more worrisome, the pace of new job additions has slowed dramatically since June, when the economy added 4.8 million jobs. In fact, if the 238,000 temporary census workers are excluded from August’s numbers, only a little more than 1.1 million Americans were rehired. (And when the Labor Department’s headline unemployment number of 8.4% is adjusted for what the bureau calls “reclassification errors,” the actual jobless rate was still above 9%.) 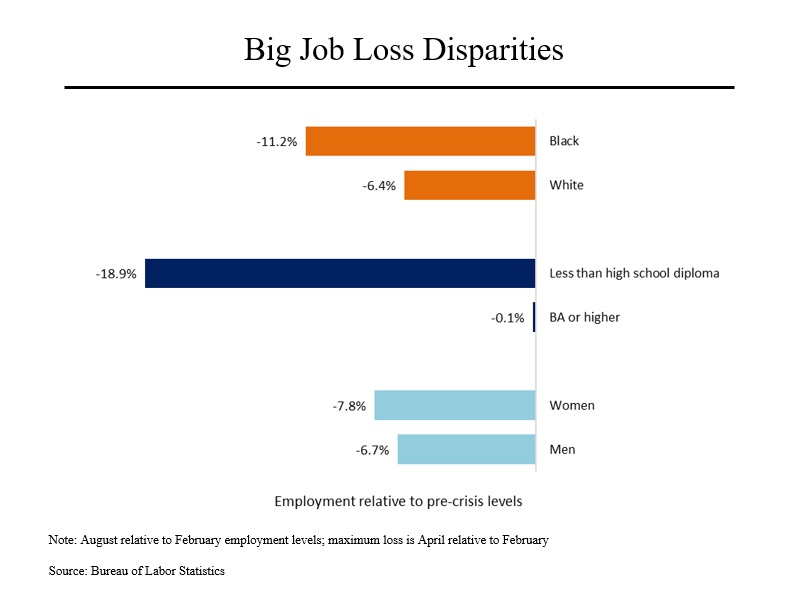 Just as the job losses related to the pandemic were disproportionately concentrated among some demographic groups, so too have the job additions (contrary to Kudlow’s claim of them being “very, very broad based”). That’s because job losses have been concentrated in industries such as travel, restaurants, recreation and the like, which are disproportionately staffed by lower income Americans, often women and people of color.

All told, 11.2% of Black Americans have lost their jobs, compared to 6.4% of whites. Almost 19% of those with less than a high school diploma have become unemployed while employment among those with a college degree has nearly fully returned to pre-Covid levels. Lastly, nearly 8% fewer women are employed compared to before the crisis, while employment among men is down by 6.7%. 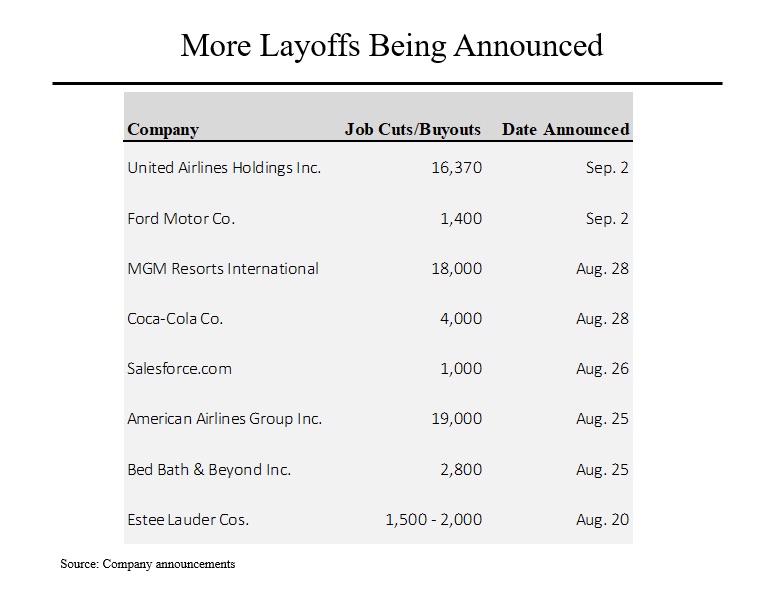 As for the future, nearly 1 million Americans a week are still losing their jobs and in just the last few weeks, more than a half-dozen major American companies have announced plans for significant layoffs and buyouts. None of these job losses were reflected in the August report. In particular, the airlines, which agreed to postpone any layoffs as part of receiving close to $25 billion in government aid, have announced massive workforce reductions that will take effect starting Oct. 1. Another hard hit company, MGM Resorts, has sent pink slips to 18,000 workers, more than 25% of its pre-Covid workforce. Even companies that were less in the eye of the Covid storm, like Salesforce.com, have announced cutbacks.