While Friday will bring the most significant economic indicator since COVID-19 struck – the April jobs announcement – the employment report yesterday by payrolls processor ADP provided some color on the disastrous state of work in America. All told, ADP found that 20.2 million private sector jobs were lost last month, by far the biggest decline since the monthly statistics were first compiled in 2002. (The previous record was 834,665 in February 2009, during the Great Recession.) 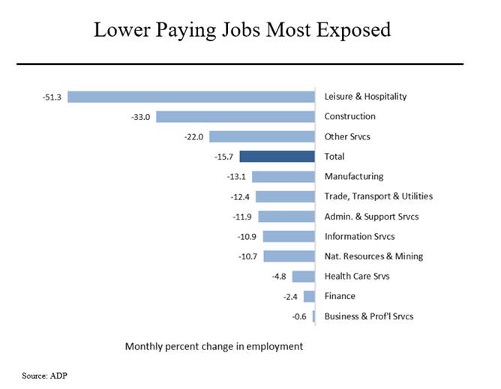 What was also interesting in the report was the wide dispersion of results by industry and how those toward the bottom of the income scale fared worse than those at the top. Not surprisingly, leisure and hospitality topped the list with a stunning loss of 8.6 million jobs, almost 43% of all jobs lost. In just a single month, more than 50% of the jobs in the sector were cut. That’s particularly troubling because many jobs in this sector are lower wage – think hotel housekeepers, fast food workers, movie theater ticket takers, and the like.

Next came construction, which lost one-third of its jobs (about 12% of all jobs lost). In third place, with 22% of its jobs lost, were a variety of service positions, ranging from auto repair to hair salons.

By contrast, at the other end of the spectrum, business and professional services (lawyers, accountants and the like) and finance saw relatively small declines in their headcounts. (These, of course, are mostly higher paying jobs.) 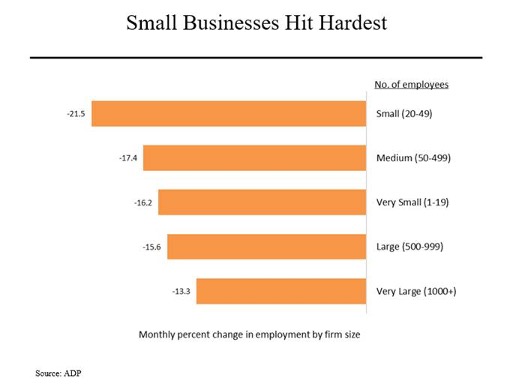 Another disappointing revelation in the ADP report was the disproportionate burden of the job losses being borne by small business. Small and medium size businesses cut their employment rolls by 21.5% and 17.4%, respectively, while the largest firms “only” reduced their headcounts by 13.3%. (Interestingly, the very smallest firms fell in between, with job losses of 16.2%. Many of these are likely sole proprietorships.)

That comes in the wake of a mid-April survey that found that 12% of small business operators said their business could not last more than another month if the virus-related shutdowns continued and 52% said they would fold within six months. 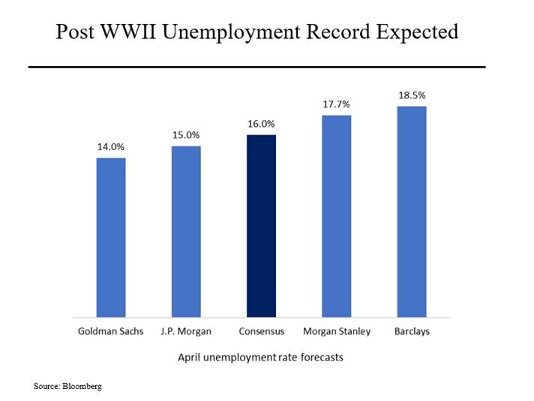 Unemployment during the Depression totaled about 25% right around Election Day in 1932 when Franklin Delano Roosevelt was swept into office. When he was reelected four years later, unemployment was still over 13%; most economists expect double digit unemployment to persist through the September jobs figures, the last to be released before election day 2020.