Data is now arriving from states like Georgia that reopened early and to the surprise of many, infection rates have generally not trended upward. That’s because Georgians (and residents of other early opening states) have mostly continued to hunker down. Good news for public health – but bad news for the economy. 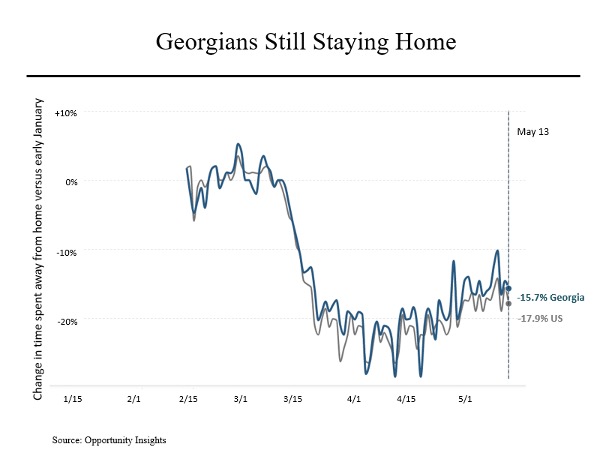 When the pandemic first exploded in early March, Americans across the country began to shelter in place and Georgia was no exception. Even though the state was among the last to impose a stay at home order, time spent away from home fell by roughly the same as it did nationally – a 20% to 30% drop at its worst. After Georgia began to lift its restrictions on April 24, time away from home in Georgia began to climb but only modestly. Indeed as of May 13, the most recent figures available, Georgians’ time out of the house was still down about 16%, just a small amount less than the national average of an 18% fall. 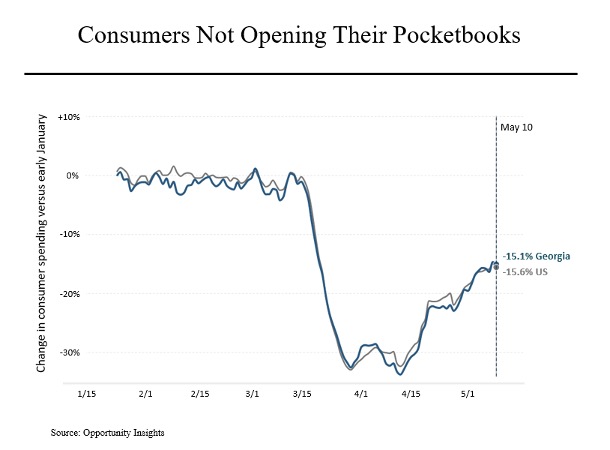 Consumer spending in Georgia has tracked the national average even more closely. It fell sharply from mid-March until it hit bottom about a month later, at more than 30% below early January levels. Coincidentally or not, the nadir of spending coincided almost exactly with the first of the $1,200 stimulus checks going out. From there, spending has been slowly recovering but is still down about 15% in both Georgia and the country as a whole. Other, even more recent data (like OpenTable restaurant reservations) show a similar picture. 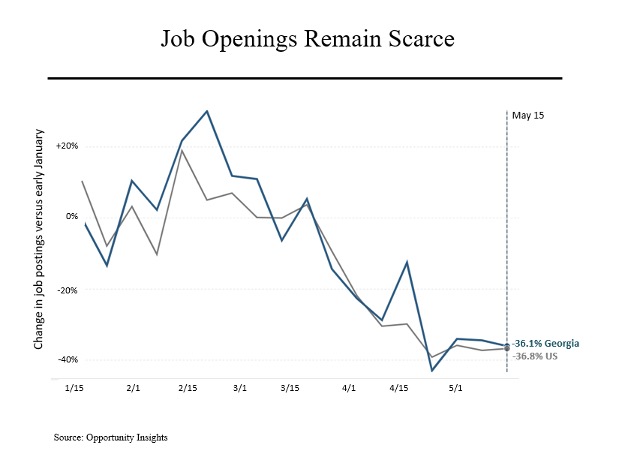 While the reticence of Georgians to resume their previous lives surely played a significant role in the state not experiencing an increase in infection rates, it is bad news for jobs and the economy. Notwithstanding its short shutdown and early reopening, the falloff in job listings in Georgia has been identical to the national decline, down more than 36%. Other statistics, like new claims for unemployment insurance, paint an even grimmer picture of the employment situation in Georgia.

The lesson of this data is that state decisions about re-openings will be of limited help to a crippled economy until Americans are confident that it is safe to leave their homes.