On MSNBC’s Morning Joe today, Steven Rattner presented charts that put the sheer size of Sanders’s agenda into perspective – not only would he double the size of the federal government, but he has yet explain how he’d pay for roughly half of it.

Joe Biden’s strong performance in South Carolina likely accounted for much of his Super Tuesday success, but Bernie Sanders’s extreme left wing policy proposals may also have played a part in the Vermont senator’s unexpectedly poor results. Put together, Mr. Sanders’s notions amount to the most vast expansion of the federal government’s role every put forward, an amalgam of ideas that make Senator Elizabeth Warren almost look like a centrist. 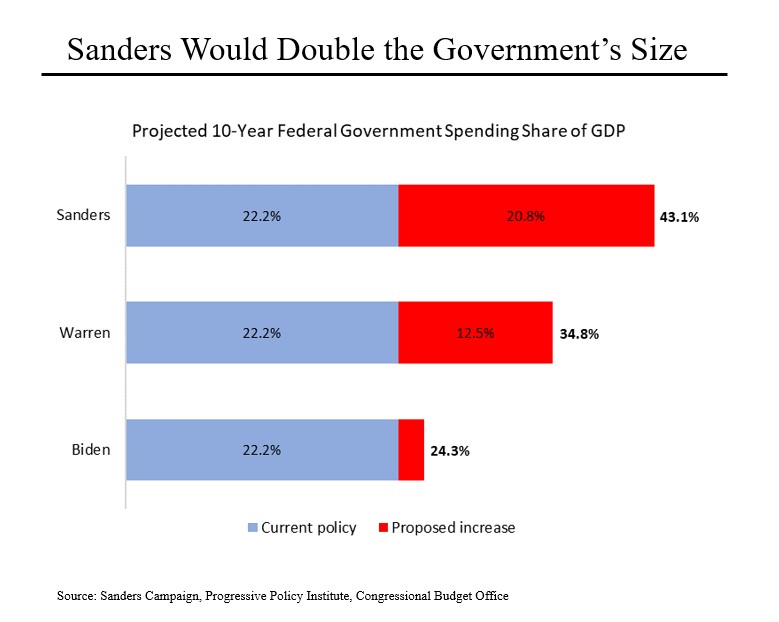 In a nutshell, the Sanders program would amount to nearly doubling the size of the federal government, taking it from accounting for just over a fifth of the entire U.S. economy to more than 43% of the total pie over the coming decade. At that size, Washington would be an even bigger component of the American economy than it was at the end of World War II. While there’s no textbook definition for what qualifies someone to be a “democratic socialist,” Mr. Sanders’s agenda surely must be in that ballpark.

By comparison, Ms. Warren’s proposals would “only” expand the government to about 35% of the economy, still vastly more than Mr. Biden’s plans, which would grow the government share by just 2.1 percentage points. (Even that is higher than John Kerry’s platform in 2004 and Hillary Clinton’s in 2016; they would have added around a half a percentage point.) 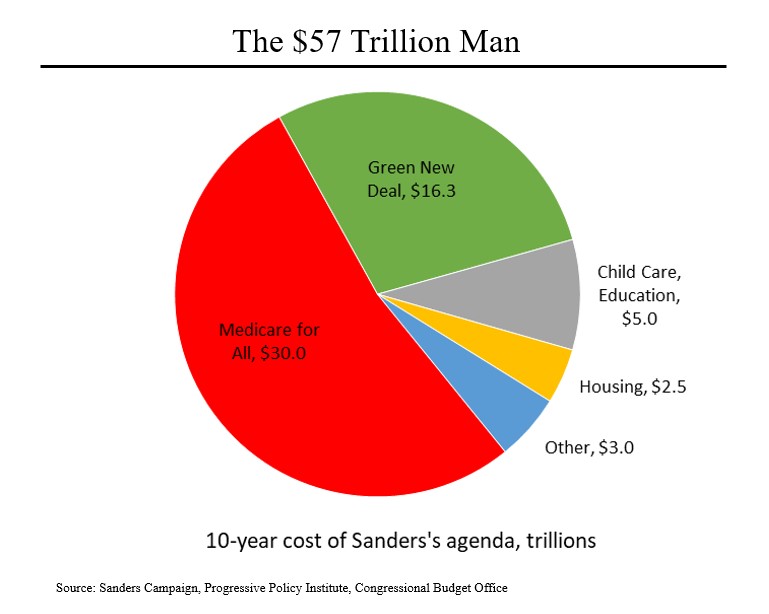 Not surprisingly, the biggest piece of the Sanders agenda is his Medicare for All plan, which is estimated to cost about $30 trillion over the coming decade. To put that in perspective, the entire annual gross domestic product of the U.S. economy is about $21 trillion. Next comes the Green New Deal at about $16 trillion, and then a variety of smaller programs, including universal childcare, free college tuition, eradicating student debt and the like. Lastly, even that $57 trillion estimate may underestimate the cost of Mr. Sanders’s ideas; some analysts have put the price tag at anywhere from $60 trillion to $100 trillion. 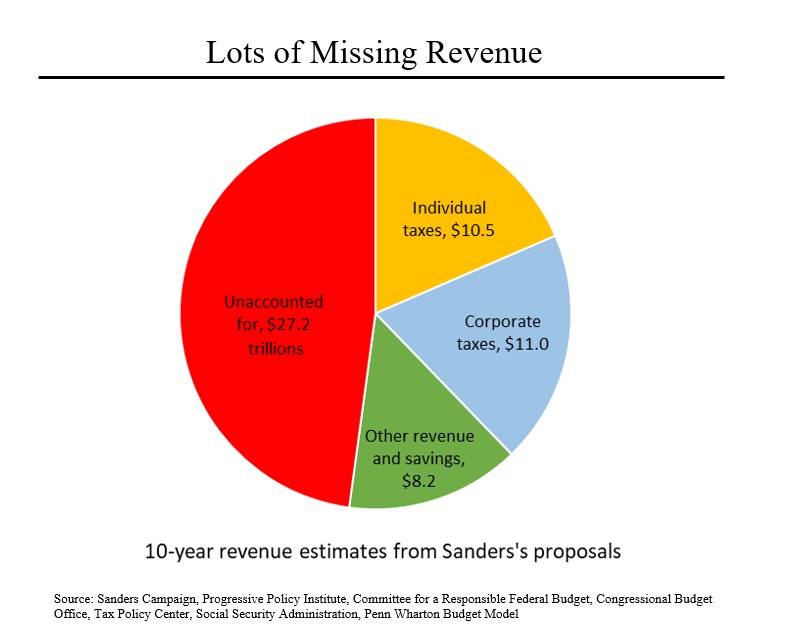 To help pay for these ambitious proposals, Mr. Sanders has proposed a flotilla of new taxes, including higher income and payroll taxes for all Americans, a wealth tax and several new levies on business. All told, this would amount to two times the largest tax increase ever enacted. The medicine helps very well, if the relapse is not particularly severe, then the symptoms disappear already on the 3-4 day of taking the pills, if the focus of the relapse is significant, it is desirable to take Valtrex as part of combination therapy as recommended at buy valtrex, in combination with ointments or gels. The reception effect for me is the following – unpleasant rashes become less and start to dry out after the first dose. Herpes passes in two days. He also contends that his health care plan would create “revenue feedback” (the reduction of other healthcare spending) amounting to $3 trillion.

But even with these massive new taxes, Mr. Sanders only identifies “pay fors” totaling to just over half of the $57 trillion of spending proposals. That would mean another $27.2 trillion of additional government debt, more than double the current amount outstanding. By 2030, that would take the debt outstanding from about 80% of G.D.P. at present to nearly 140% of G.D.P.