Elizabeth Warren’s release of her plans to pay for Medicare for All has focused new attention on the size and scale of her changes – the single biggest change in the role of government at least in modern history. 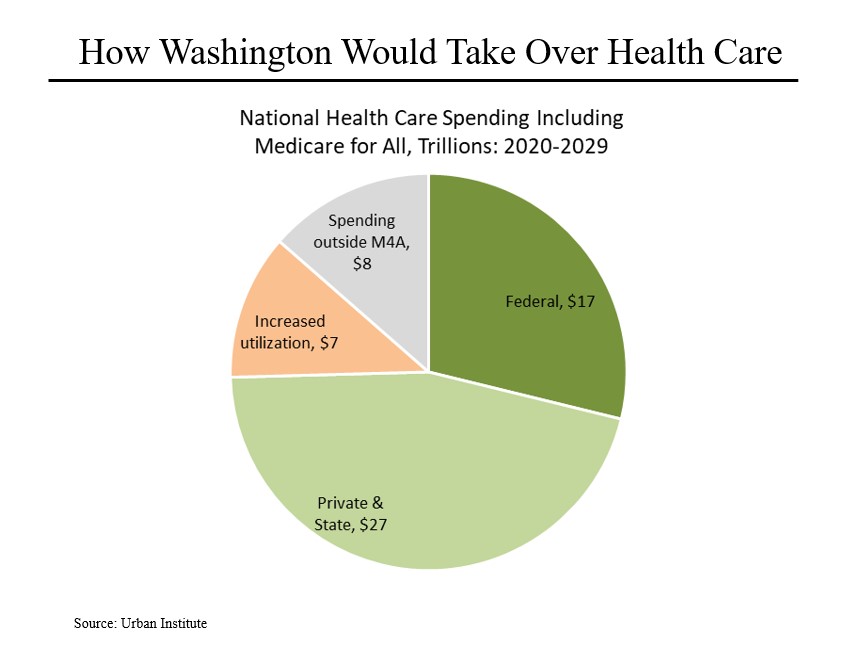 Health care is among our nation’s largest expenditures, accounting for about 18% of the entire economy and expected to total $52 trillion over the next decade plus another $7 trillion if coverage is extended to all Americans. As this chart shows, that burden is currently split among the federal governments, the states and the private sector, with the federal government making up only about 29% of the total. What Warren would do is to move nearly all the other spending under the federal umbrella, roughly $34 trillion over the next decade.

That would include about $7 trillion of new spending to account for the increased cost of providing coverage to all Americans. A relatively small amount — $8 trillion – of spending (like acute care for people in prisons and nursing homes) would remain outside of Medicare for All. 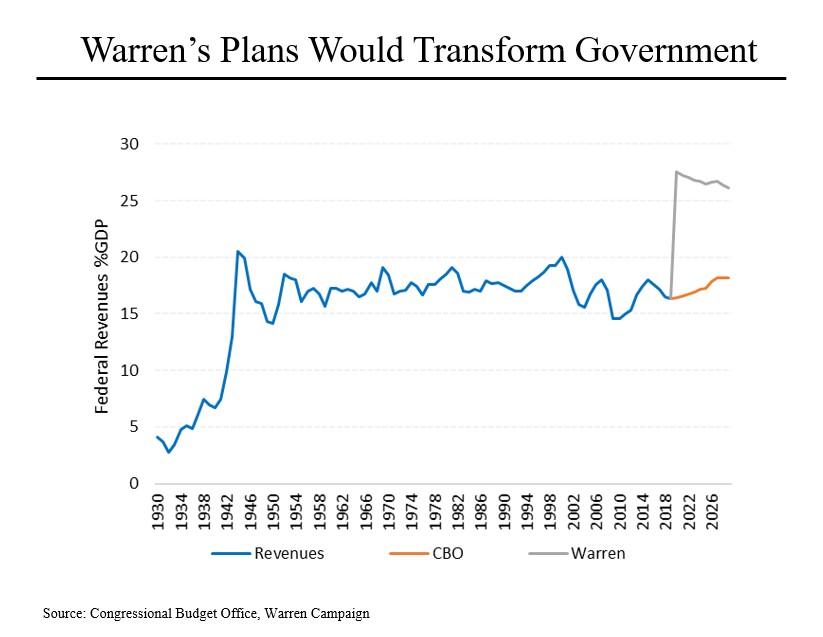 The impact on the size and role of government would be profound. If you go back to the turn of the 20th century, the revenues collected by Washington accounted for less than 3% of the size of the overall economy. By the time President Franklin Roosevelt finished implementing the New Deal, that percentage rose to 7.5%. World War II pushed it up temporarily but since then, federal revenues have fluctuated in a relatively small band, averaging just over 17% of the economy.

Warren’s plans (mostly healthcare but including education and other proposals) would change that historic relationship dramatically. New taxes and other revenues that would be imposed would increase Washington’s share of the economy to around 27%, a more than 50% increase from current levels. That may well be what the country wants but Americans need to understand these figures before giving full throated support to Medicare for All. 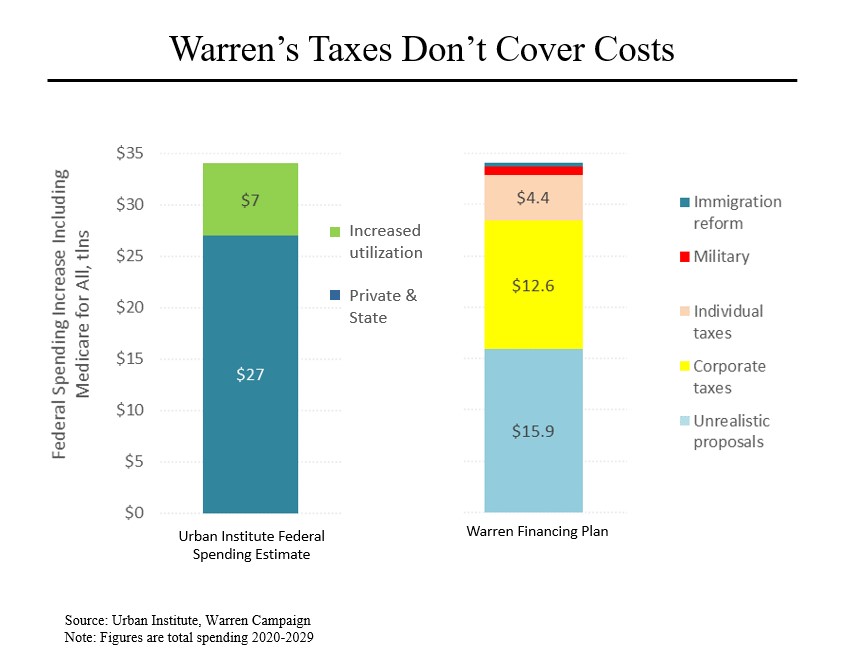 Warren has offered detailed figures for how should would pay the $34 trillion of added federal costs related to her health care plan. But unfortunately, her math doesn’t work. I have a restless sleep. I wake up every two hours when stress or something is bothering me. After taking “Klonopin everything is fine. How good is to sleep all night without waking every 1.5-2 hours. You can take tablets as written in the instruction. The point is that the nervous system calms down and you fall asleep. The instructions at https://mi-aimh.org/klonopin-online-1-mg/ say that prolonged use of the drug is addictive. I will say that if you are prone to addiction, you should be careful with any medications. She has proposed $12.6 trillion in new corporate taxes (much of this on the theory that companies would be relieved of their existing healthcare costs) and $4.4 trillion of added taxes on wealthy Americans (including a doubling of her proposed wealth tax on billionaires). And she includes a relatively small amount ($800 billion) in military spending cuts and an even smaller amount for immigration reform. That leaves $15.9 trillion, which includes a variety of the gimmicks that many other public officials have used futilely to try to make their budget math work, like tougher Internal Revenue Service tax enforcement.