On MSNBC’s Morning Joe today, Steven Rattner documented the meteoric rise of Trump’s dishonesty with the public on a wide range of topics including his most recent favorite, the Ukraine whistleblower.

President Trump marked his 1,000th day in office this week while his total lies during that time now exceeds 13,435 – an average of 13.5 per day. 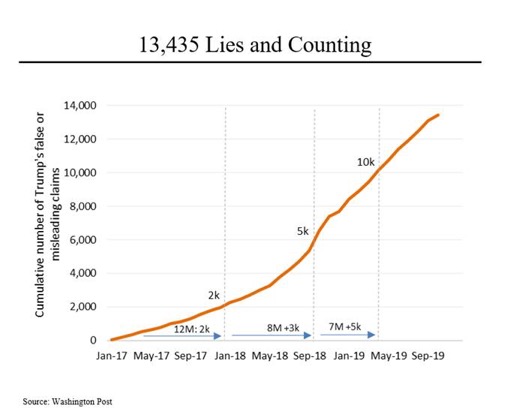 According the Washington Post Fact Checker, it took Mr. Trump a full year to cross the 2,000 lie mark but only eight months to add another 3,000 lies to his total and still less time (7 months) to lie another 5,000 times. In the 166 days since the president reached 10,000 lies on April 26, Mr. Trump has averaged 20 lies a day. By comparison, he “only” averaged 5.7 lies a day in his first year in office. 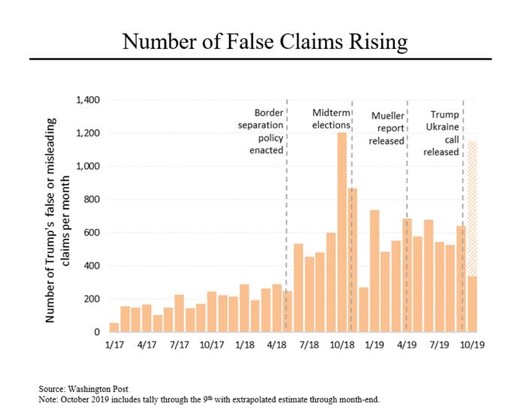 While Mr. Trump’s propensity to lie has increased dramatically since the spring of 2018, certain key events of his presidency has caused particular eruptions in the rate of falsehoods. The first of these was the enactment of his border separation policy, which generated substantial public pushback. Next came the midterm elections. Mr. Trump stepped up his pace of lies last October to a record 39 per day. (That didn’t help; the midterms were a disaster for the Republicans and the president.) While the Mueller report caused another, smaller uptick, the Ukrainian issue is on track to cause another major increase in the president’s propensity to lie. 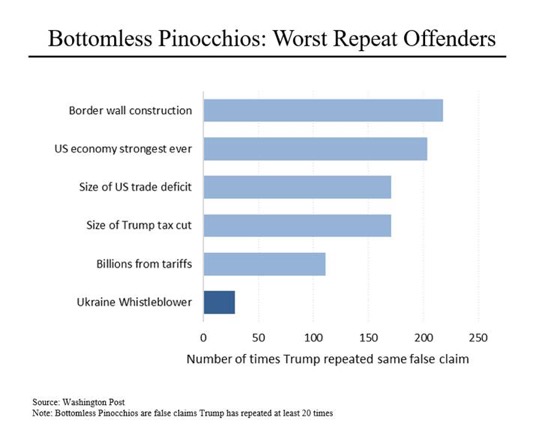 Among the many remarkable aspects of the president’s lies have been his propensity to repeat the same lie multiple times, what the Washington Post calls a Bottomless Pinocchio. By the paper’s calculation, the president has done so at least 20 times on 27 different subjects. His most repeated claim – a staggering 218 times – is that the border wall is being built. The falsehood about the strength of the American economy was repeated 204 times. Other oft-repeated lies have concerned the trade deficit, the tax cut and the tariffs.

Then there’s the Ukrainian whistleblower. While only checking in at 29 repeats thus far, it is the fastest that Mr. Trump has yet to earn a Bottomless Pinnochio.