As in past Democratic debates, health care was center stage in Houston last night – coincidentally, three days after troubling new data on coverage was released. 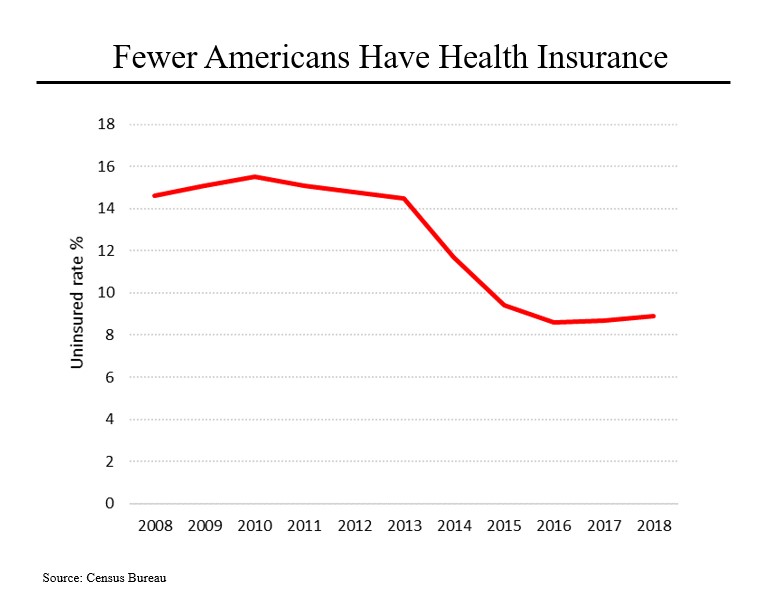 After falling dramatically following passage of the Affordable Care Act, the percentage of Americans lacking health insurance rose in 2018, for the second consecutive year. All told, the number of uninsured Americans rose by 2 million, to 27.5 million, which is particularly troubling given the continued fall in the unemployment rate. The bulk of the decline came among lower income Americans who get their health care through Medicaid, the expansion of which was a key component of the A.C.A. While this disappointing news is due to myriad factors, efforts by the Trump administration to undermine Obamacare are at the top of the list. For example, the administration approved the first-ever work requirements, which was found to have cost 20,000 residents of Arkansas their coverage. (Work requirements have now been put on hold, at least temporarily, by the courts.) President Trump has also made it harder for families to enroll in Medicaid by curtailing outreach efforts and allowing states to ask for more paperwork.

The increase in uninsured, which was relatively small among the total population and African-Americans, was substantially larger for Hispanics and foreign-born – and was still greater for the children of non-citizen immigrants. This was also due, at least in large part, to the Trump administration, which has cracked down on enrollment in Medicaid by immigrants. Many people at https://mi-aimh.org/ativan-lorazepam-online/ say that the drug has a lot of side effects, but I felt only drowsiness. It can be addictive with long-term use. I cannot say much as I used it in a short-term course. In my opinion, the tranquillizer Ativan is very powerful and it helps to cope with anxiety and panic attacks. For example, a new rule would give federal officials the right to deny green cards to legal immigrants who have received certain public benefits, like healthcare.

The new release of statistics also serves as a reminder of the political (and policy) implications of Medicare for All. More than half of all insured Americans (54% or 156 million people) receive their coverage from their employers and another 20.5 million purchase their insurance directly, often through the exchanges set up under the A.C.A. The balance of those who have coverage receive it through Medicaid or Medicare. (As a reminder, 27.5 million Americans remain uncovered.)