Steven Rattner’s NYT/Morning Joe Charts: The Trump Economy Is Leaving Many Americans Behind

On MSNBC’s Morning Joe yesterday, Steven Rattner presented charts documenting that while polls show a positive net approval of Trump’s handling of the economy, many Americans continue to be left behind.

His analysis and charts appear below and are also posted on The New York Times Opinion page.

A major new poll released Sunday showed that Donald Trump’s approval rating is on the rise, particularly for his handling of the economy. How can Democrats make their case for why the economy may not be as good as it can appear? Here are three examples of groups of Americans who are being left behind.

It may be common knowledge that African-Americans are not as well off financially as white Americans but what is not widely understood is the extent to which black Americans have fallen further behind over the past nearly two decades. In 2002, African-Americans, on average, earned just over 80 percent of what white Americans earned. By the first quarter of this year, after various ups and downs, that figure had fallen to about 76 percent. 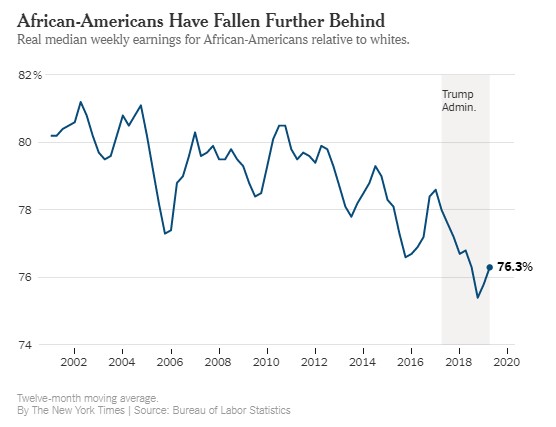 Much of that decline is because of widening income inequality – when wage disparities increase, those closer to the bottom (where a disproportionate number of black Americans are clustered) fall further behind. But that’s not the only reason; discrimination also plays a role. Even after controlling for differences in age, gender, education and region, black workers are currently paid about 16 percent less than their white counterparts. (And when it comes to wealth, the numbers are even worse; the median white American family has 10 times the net worth of the median black family.)

While a vast majority of African-Americans typically vote Democratic, turnout among this group – which fell in 2016 – can be an important factor in a presidential election.

Another group of Americans who have not fared well over an extended period of time are manufacturing workers. The chart below focuses on the automobile sector; it shows that wages of auto workers, after adjusting for inflation, fell by 26 percent between 2002 and 2013. And since then, real earnings for this group have barely budged. (Of course, many of these individuals are those white working class Americans who helped President Trump to victory in 2016 – raising questions about their likely fealty to him in 2020.)

Then there are geographic differences. Since the economic recovery took hold, many major urban centers have prospered, as jobs in “knowledge industries” have proliferated and as many young people have moved to these population clusters. That has left more rural areas – particularly in the South – behind. For example, for the first portion of the recovery, wages in New York City and in Mississippi followed a similar trajectory of little change, after adjusting for inflation. But beginning in the middle of 2016, the pattern of wage changes began to diverge – earnings rose steadily in New York City while they began an erratic – but overall – decline in Mississippi. Democrats are unlikely to capture Mississippi in the 2020 election but the disaffection of rural voters around the country could be costly to Mr. Trump. 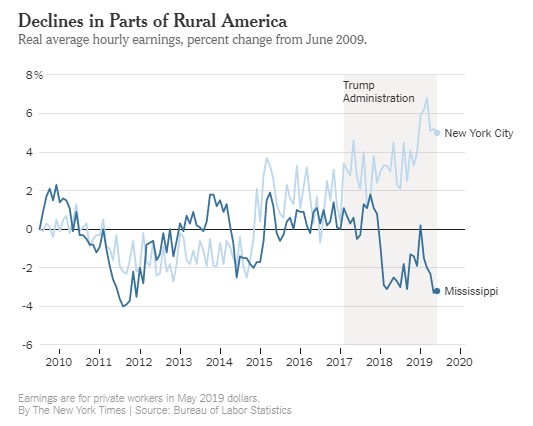