Steven Rattner’s Morning Joe Charts: The Top 2020 Contenders Pull Away From The Pack in the Money Primary

The second quarter fundraising totals are now in and perhaps not surprisingly, they mostly mirror the Democratic hopefuls’ standing in the public opinion polls. And they reinforce the notion that five of the candidates are well ahead of the rest of the field. 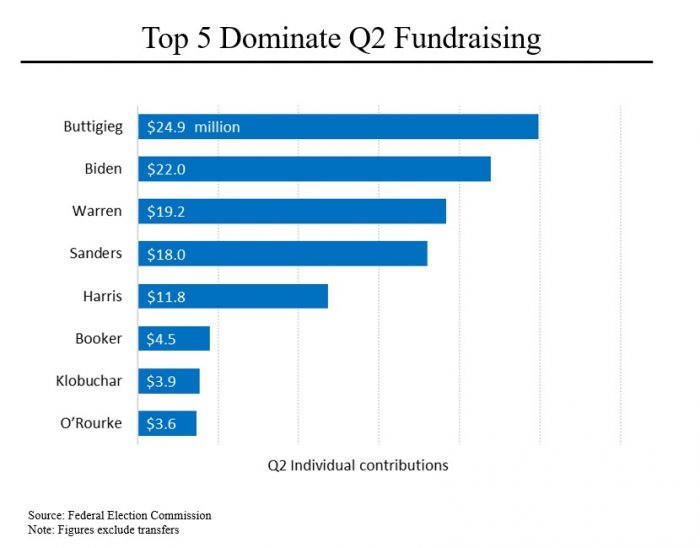 All told, the top group raised $96 million during the three month period, about three quarters of the total fundraising by the more than two dozen candidates. Perhaps the biggest surprise was the showing by Mayor Pete Buttigieg – nearly $25 million garnered in part via 70 fundraisers. That’s in addition to about $7 million raised in the first quarter. Former Vice President Joe Biden, who did not announce until April 25, raised $22 million; he held 29 fundraising events. Next came the two progressives – Elizabeth Warren and Bernie Sanders – at $19.2 million and $18 million respectively, all raised without formal fundraising events. Last among this group was Senator Kamala Harris.

Then there’s a big drop until the next group, none of whom raised even $5 million during the quarter. Beto O’Rourke, in particular, faded from the first quarter, when he raised $9.4 million in just 18 days. 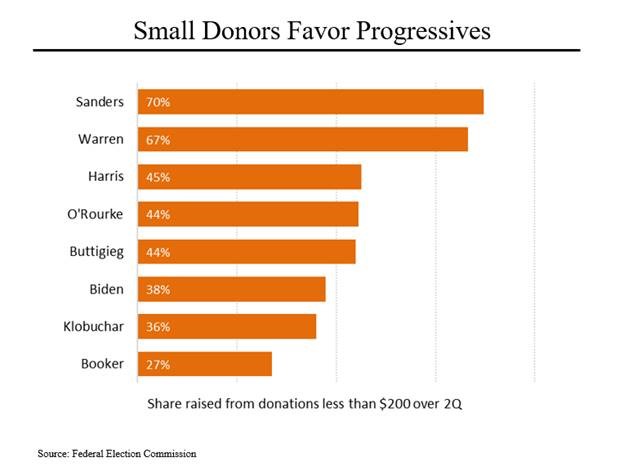 As noted, Mr. Sanders and Ms. Warren stood out for raising the bulk of their money in small donations, mostly online. Mr. Sanders had nearly 1 million donors who gave an average of $18 each and 45% were from donors 39 or younger. By comparison, just 38% of Mr. Biden’s take came in small donations and more than one third came from large donors who can give up to $2,800 but then can’t make further donations. 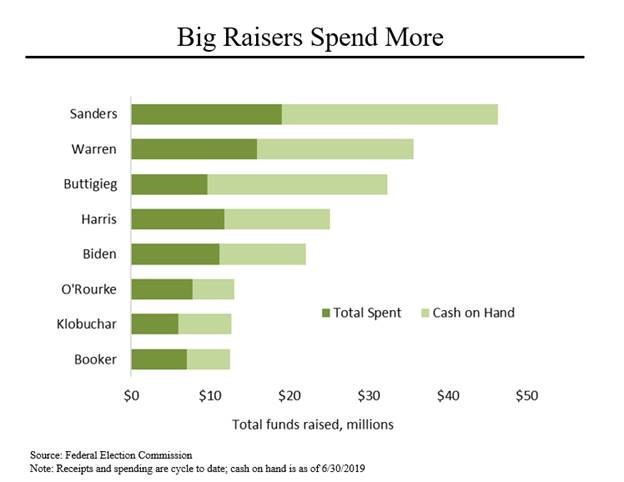 Not surprisingly, money matters. The size of each campaign’s expenditures generally tracked its fundraising prowess. Mr. Sanders and Ms. Warren spent considerably more than any of the other candidates but because the cash continued to flow in (and because they each transferred more than $10 million from their Senate campaign accounts), they still ended the quarter with more cash in the bank than any of the others, except for Mayor Buttigieg. His spending was relatively restrained during the quarter. Given the relatively weak second quarter fundraising by the rest of the field and the far smaller bank accounts, it’s not clear how many of this second tier will be able to mount credible campaigns during the second half of the year.