On MSNBC’s Morning Joe today, Steven Rattner presented charts showing the uneven first quarter fundraising totals among Democrats, while President Trump has been spending heavily on his reelection almost since he entered the White House.

The first quarter fundraising totals are now in for all the Democratic presidential contenders. With polls essentially meaningless at this early stage, the decision by individual Americans to contribute may provide the best indication of early momentum among the large field. 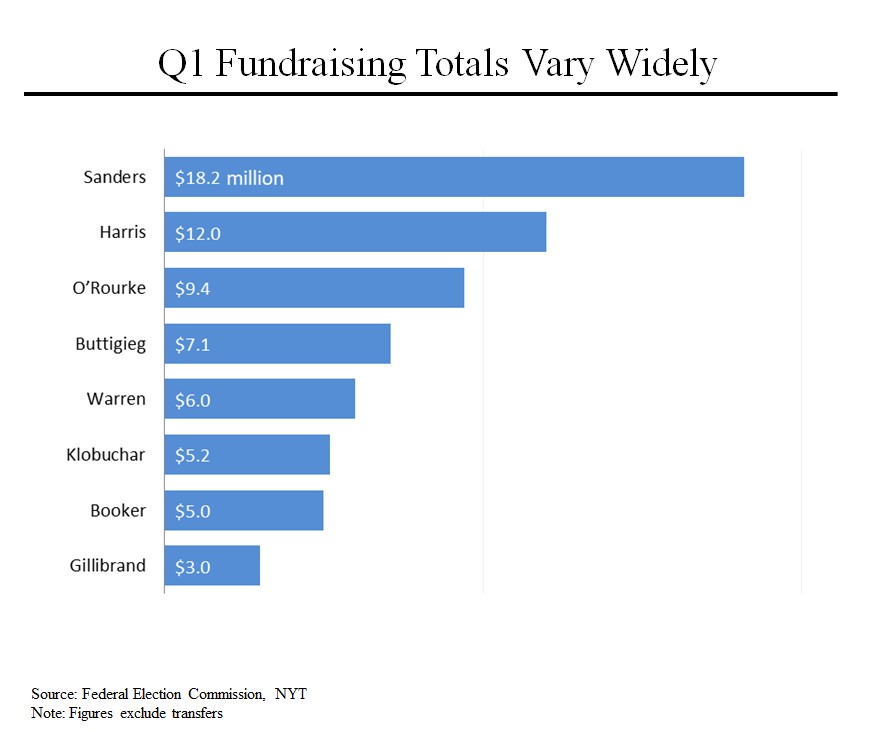 Every campaign tries its best to spin the numbers to its advantage; for example, they often include left over funds from earlier campaigns among their totals. So it’s important to scrub them down to what was actually contributed during the first three months of 2019.

Looked at that way, there’s a quick drop off from the most successful fundraisers to the rest of the pack. As has been widely publicized, Bernie Sanders raised an astounding $18.2 million in the first quarter. In fairness, Mr. Sanders had the advantage of a huge donor list from 2016, although his fundraising pace in 2019 was faster than during the previous cycle.

Next came Kamala Harris, at $12 million followed by Beto O’Rourke and Pete Buttigieg. (Note that even though several of the candidates only announced toward the end of the quarter, most began raising for “exploratory committees” before their official launches).

Perhaps surprisingly, Elizabeth Warren raised only a third of what her rival, Mr. Sanders, raised and less than newcomers like Mr. O’Rourke and Mr. Buttigieg. Trailing further behind were Amy Klobuchar, Corey Booker and Kirsten Gillibrand. 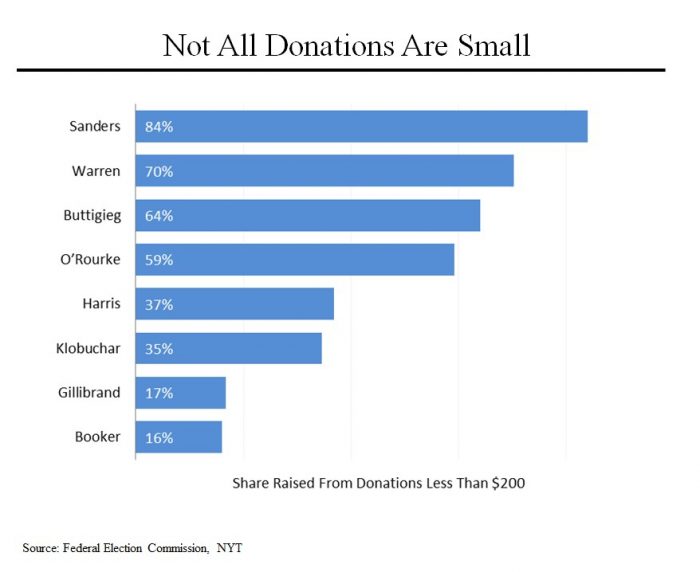 Another measure of popular support is how large a share of each candidate’s donations came from small donors. In that competition, Mr. Sanders also came in first, with 84% of his contributions coming in amounts less than $200. He was followed by Ms. Warren (who has eschewed fundraisers with people who write large checks), Mr. Buttigieg and Mr. O’Rourke.

What’s also important about these numbers is that while not exactly correlated with overall fundraising success, it’s clear that being able to reach small online donors is an important ingredient of fundraising success. Put another way, the importance of large donors and bundlers is clearly diminished. 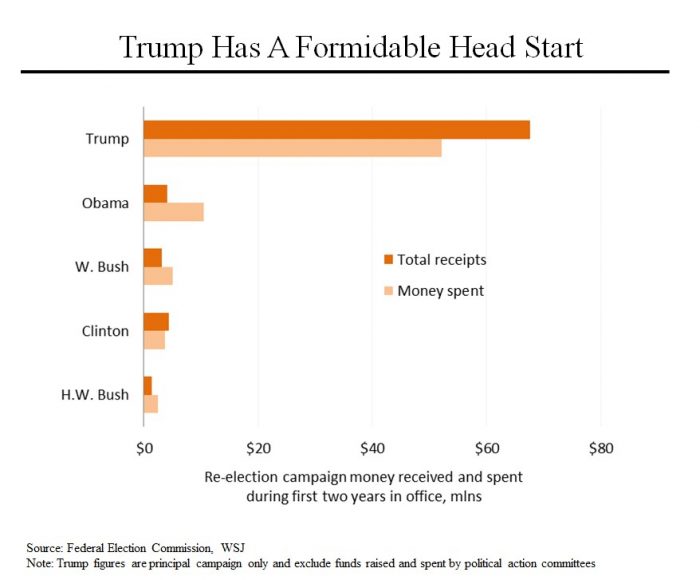 As for President Trump, while he raised a comparatively small $7.3 million in the quarter, that follows a massive amount of money received and spent over the past two years. While past presidents have typically waited until halfway through their first terms to begin raising money for their reelection, Mr. Trump began almost as soon as he moved into the White House.

Note that Mr. Trump’s fundraising over the past two years includes not only the direct campaign “hard” money, which is limited to $2,800 per donor, but also large checks written through “victory committees” and political action committees.