Steve Rattner’s Morning Joe Charts: The Race For 2020: All Democrats, But Wide-Ranging Views

With Bernie Sanders’ announcement that he will again seek the presidency, the Democratic field has now reached an even dozen. That ties the record for the most Democrats to ever seek their party’s nomination – and more are likely to join the contest. Today’s charts depict two analyses for how to array most of the candidates along the ideological spectrum. 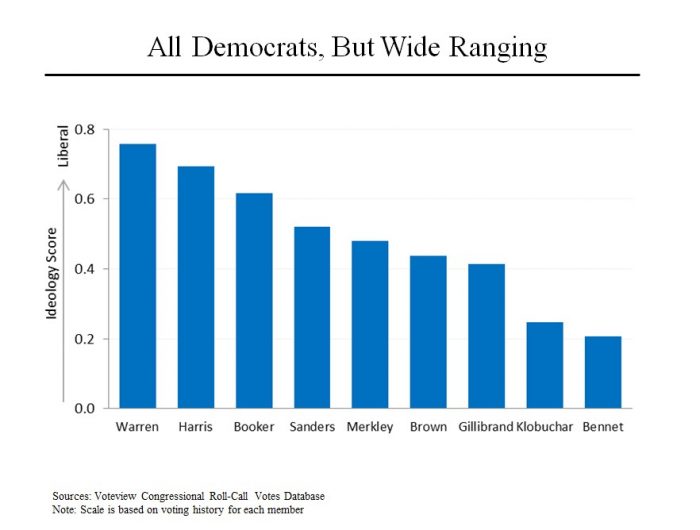 Political scientists at UCLA have used voting records to rank every member of the House and Senate along liberal to conservative lines. This chart shows how nine Senators – six who are in the race and three who are considered likely to join — stack up. Not surprisingly, Elizabeth Warren ranks as the most liberal; indeed, she is the most liberal member of the entire Senate. Perhaps more surprisingly, Mr. Sanders only comes in fourth, after Kamala Harris and Corey Booker. At the other end, Amy Klobuchar and Michael Bennet show up as distinctly more moderate.

To look at a couple of specific examples, Mr. Bennet, Ms. Klobuchar and Sherrod Brown were the only members of this group to vote for the confirmation of Jerome Powell to be chairman of the Federal Reserve (an exemplary appointment). Mr. Bennet was the only one to vote for the modifications to Dodd-Frank that Congress passed last year. In contrast, Ms. Warren, Ms. Harris, Mr. Sanders, Jeff Merkley and Kirsten Gillibrand all voted against the last Defense Department appropriations bill. 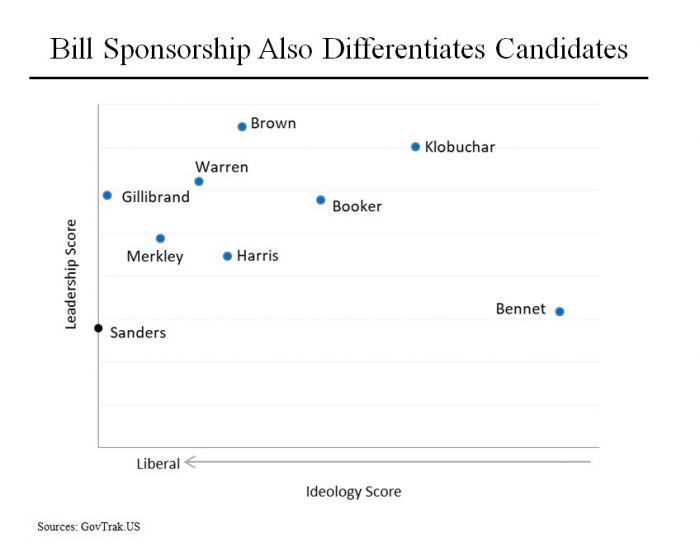 Another effort to categorize lawmakers looked at what bills each member sponsored (along with a “leadership” score to measure how often their colleagues came on board as one of their co-sponsors). This measure produced similar (albeit with small differences) results. In this version, Mr. Sanders, Ms. Gillibrand, Mr. Merkley and Ms. Warren show up as the most liberal, while Ms. Klobuchar and Mr. Bennet continue to stand out as center-left candidates.

Why are Mr. Sanders and Ms. Gillibrand so far left in this calculation? One reason is that they are the only two sponsors of Mr. Sanders’s proposal to institute a 99.8 percent estate tax on inheritances above $3.5 million. On the other hand, Mr. Bennet, Ms. Klobuchar and Sherrod Brown have all declined to co-sponsor Medicare for All, which the other six have embraced.

The names toward the top of the chart – Mr. Brown, Ms. Klobuchar, Ms. Warren and Ms. Gillibrand – all rank the highest on the leadership spectrum.