Donald Trump has flip-flopped his way through many policy decisions (think North Korea), and high on that list of policies managed incoherently has been trade. Some of that has been due to philosophical divisions among his advisors that Trump wouldn’t or couldn’t resolve. But much of it has been to Mr. Trump’s own seat-of-the-pants management approach. 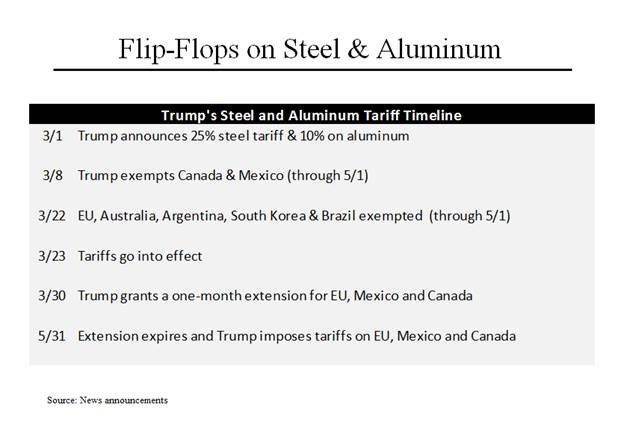 Let’s take Mr. Trump’s adventure with the tariffs he proposed on March 1 on steel and aluminum – 25% on the former and 10% on the latter from all countries covered in the administration’s investigation. This would have applied to $48 billion of imports. Worth noting: To do this, Mr. Trump is employing a special provision of the law intended for national security matters (and previously, only used to address foreign oil imports in the 1970s.)

A week later, the president gave Mexico and Canada, who he was renegotiating NAFTA with, a reprieve until May 1. Two weeks after that, he temporarily waived the tariffs for a wide variety of countries, making 63% of steel imports exempt.

After another week or so, he gave extensions to the EU, Canada and Mexico.

And now today, he’s decided to move ahead with the EU, Mexico and Canadian tariffs, which would make the final tally (at least for now) 85% of the original amount. (On $41 billion of imports.) 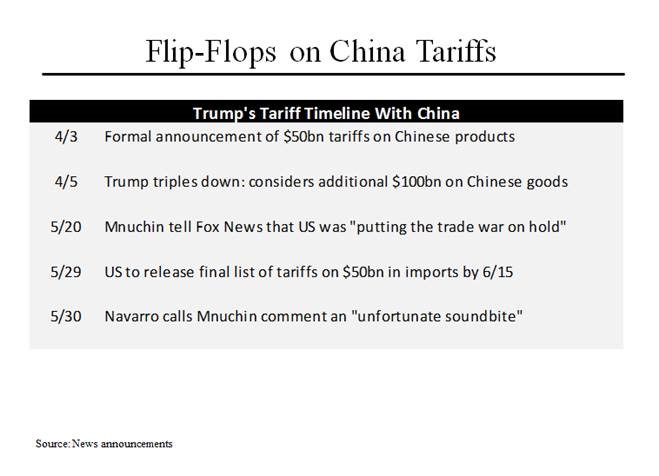 Then there’s China. Mr. Trump has flip-flopped on many policies involving China, including trade. On April 3, he proposed $50 billion of tariffs on Chinese goods. Hours later, China responded with its own list of 25% tariffs on 106 goods.

Two days later, the president tripled down and said he would add another $100 billion of Chinese tariffs. Then the administration spent most of the next six weeks trying to persuade China to purchase $200 billion of additional American goods. (We only sell the Chinese about $155 billion of goods at the moment so the notion that we could deliver $200 billion more stuff seems implausible.)

China made a few small concessions, leading Treasury Secretary Mnuchin to say that the United States was “putting the trade war on hold.” But hours after that, Robert Lighthizer put out a statement, effectively taking issue with Mr. Mnuchin.

On Monday (May 29), the administration said it would release its final list of tariffs by June 15. The following day, Peter Navarro, a hawkish trade advisor, called Mr. Mnuchin’s comments an “unfortunate soundbite.” 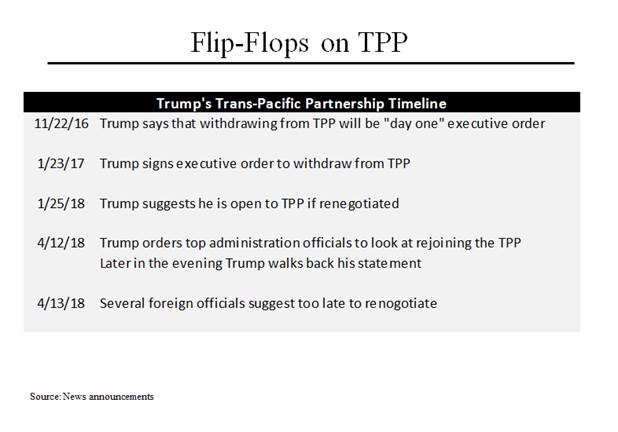 Lastly, let’s consider TPP. During the campaign, Mr. Trump said quitting TPP would be a “day one” executive order. And he pretty much lived up to that commitment. But two days later, he said he would be open to TPP if it could be renegotiated. In early March, the 11 remaining countries signed the agreement, slightly revised to eliminate the provisions that the U.S. had requested. In mid-April, the president ordered top officials to look at rejoining TPP but the very next day several foreign officials said it was too late.

And of course, the handling of NAFTA hasn’t been much different.