Trump’s Economic Advantage Is Not Unbeatable

Democrats can easily show that the president has done little to help the economy.

Every few days, fresh economic statistics roll out, each one almost invariably reinforcing the perception of a solid economy. In his State of the Union address on Tuesday night, President Trump reinforced that impression — and took credit for it.

He has ammunition. According to calculations by J.P. Morgan, Mr. Trump is the beneficiary of the strongest economic tailwind of any incumbent running for re-election since 1900. 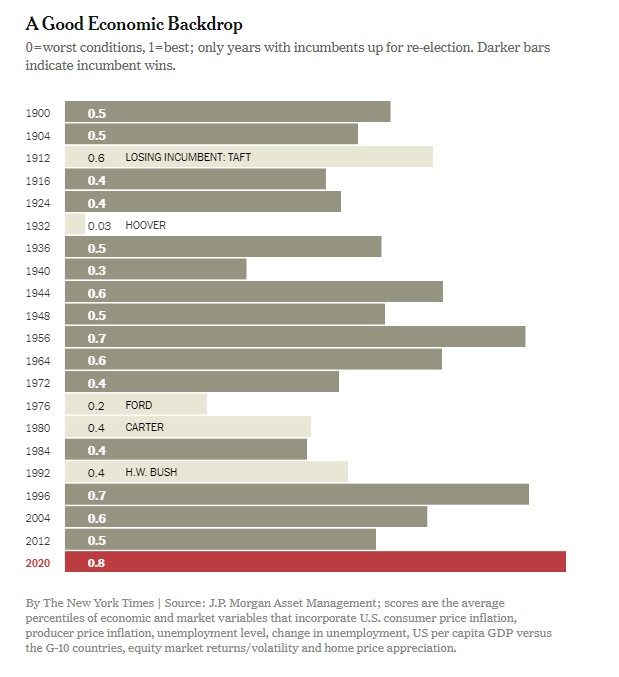 But Democrats shouldn’t despair. While overcoming that tailwind will be a tough challenge, the economy isn’t as good as it looks. Equally important, on balance, Mr. Trump has had little to do with its continued expansion, providing several lines of attack for the opposition, as follows:

The Trump recovery is merely an extension of the Obama recovery. Yes, we’re adding jobs every month, and yes, the overall economy is growing. But the performance of both of these key headline indicators has not been anything for the president to brag about.

Take jobs. In Mr. Trump’s 35 months as president, the economy added an average of 191,000 jobs per month and the unemployment rate fell by 1.2 percentage points. Sounds pretty good, right? But during the last 35 months of the Obama presidency, new jobs averaged 227,000 per month and the unemployment rate dropped by 2 percentage points. 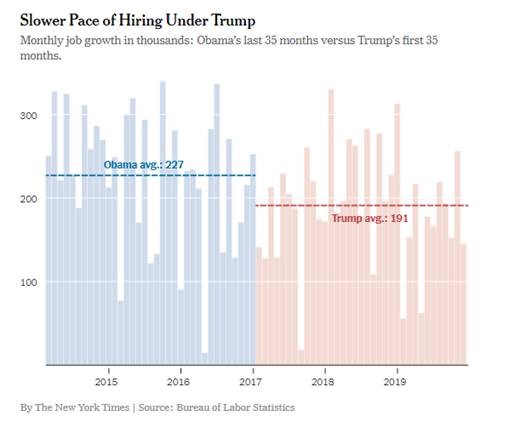 As for overall economic growth: essentially the same under Mr. Trump as under Mr. Obama. Moreover, last year saw the slowest expansion of the Trump presidency. 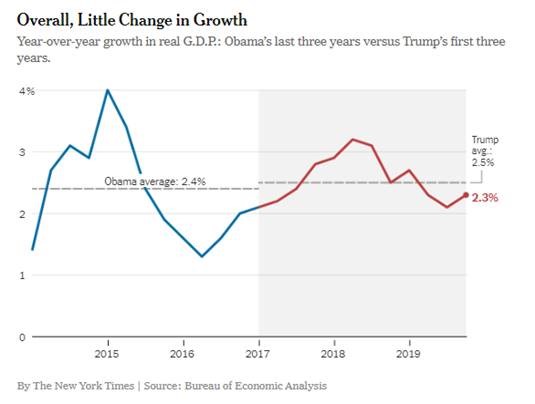 Unemployment may be low but wages, adjusted for inflation, have barely grown. Once again, the headline numbers — a roughly 3 percent annual growth rate — seem reassuring. But add in the effect of inflation and the picture looks quite different. On average, real wages have risen at just a 0.8 percent rate under Mr. Trump, compared with 1.3 percent over a similar period under Mr. Obama. 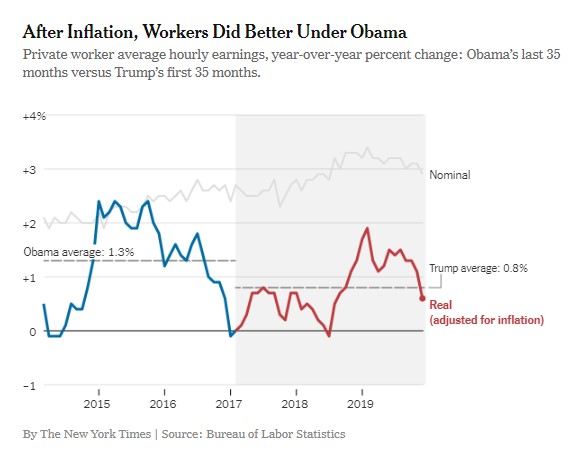 Manufacturing has arguably done worse under Mr. Trump’s stewardship. Not only has Mr. Trump failed to reverse the steady decline in industrial production’s share of our economy, but his self-inflicted trade war contributed to outright job declines last year in key 2020 states. Wisconsin and Pennsylvania lost factory jobs, as did Oklahoma, Indiana and New York. At least partly as a result, total jobs grew at below-average rates in those states (along with other important states like Ohio, Michigan and Minnesota). What happened to Make America Great Again? 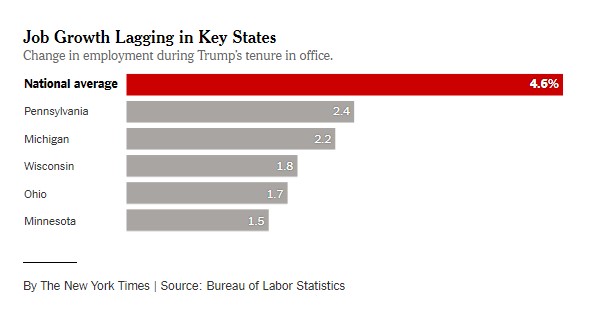 The economy is weakest in “Trump country.” Mr. Trump’s “base” has done worse than the nation; job and wage growth has been subpar in many states and counties he carried in 2016. That’s partly because of the overall manufacturing weakness and partly a reflection of the general trend in which cities where the knowledge economy is centered have been performing better than rural areas. Blame also the softness in agriculture, another consequence of his misguided trade war. That’s an opportunity for Democrats to drive home the facts to Mr. Trump’s supporters.

Income inequality remains at historic levels. Corporate profits have risen sharply (thanks in large part to the Trump tax cut), and a soaring stock market has benefited the wealthy disproportionately. Mr. Trump’s tax cuts for individual Americans was regressive, helping the rich more than middle-class Americans. While earnings for those at the very bottom have increased, that’s at least partly due to states increasing their minimum wages. But the gap between those at the top and those in the middle continues to widen.

Promises made, promises broken. During his presidency, Mr. Trump has announced ambitious plans with abandon: growth of “4, 5, 6 percent,” a tax cut that would raise workers’ wages significantly and new trade policies that would again make the United States a manufacturing powerhouse. None of those things has happened. To get his tax cut passed, for example, his Council of Economic Advisers claimed it would add $4,000 a year to the average American’s paycheck. Instead, the average household’s tax cut was a mere $930, and as noted, real wages have barely budged. His promised investment boom fizzled quickly; capital expenditures by businesses have been declining in real terms.

The challenge for Democrats is tough. An increasing share of Americans believe the economy is improving. And Mr. Trump’s approval ratings among his base have not been dented.

But the fact remains that little of what Mr. Trump has done has helped the economy. The challenges for most Americans remain steep. Democrats need to keep reminding voters of those two simple facts.