The Mystery of High Stock Prices

Why is the market doing so well when the economy is doing so poorly?

From the Department of Curiosities: On Tuesday, as the number of new coronavirus cases continued to spike to record levels, the stock market closed out its strongest quarter in more than two decades.

That was just one stop for the equity markets on a spring roller coaster ride, three months that saw the fastest 30 percent decline in stock prices in history, followed by the fastest 50-day increase on record.

This year’s volatility may be extreme, but it’s only the latest of many seeming disconnects between stocks and the economy. In March 2009, for example, while reported monthly job losses were topping 700,000, share prices abruptly ended their 17-month decline and began a recovery that essentially lasted until the virus arrived. 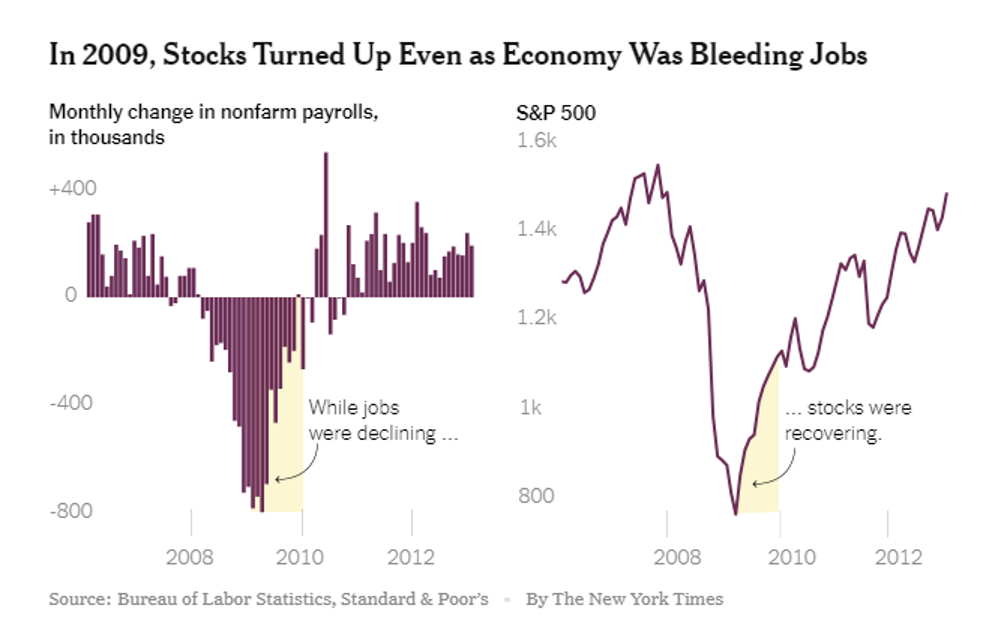 What gives? Why has an economy that has experienced the biggest collapse since the Great Depression not — at least to date — inflicted any lasting damage on a market that is often expected to reflect the state of the economy or, at least, of corporate profits?

Some hold the view that the economy’s troubles will be short-lived; a V-shaped recovery will soon unfold and the stock market is merely looking ahead. Others cite the upsurge in buying by small individual investors.

My vote for the most significant driver of stock prices is the huge amount of liquidity that the Federal Reserve has injected into the financial system, in an effort to counteract the depressive economic impact of the virus.

That has pushed interest rates to record lows, turning money market funds, bonds and other fixed-income instruments into low-returning investments. The Standard & Poor’s index of 500 stocks, for example, currently has a dividend yield of 1.9 percent, compared with 0.7 percent for 10-year Treasury notes.

Unusually, an investor can now make more in current income from stocks than from high-quality fixed-income securities while participating in any future appreciation in share prices. (Yes, while stocks can also go down, over the long term, they have always appreciated.) 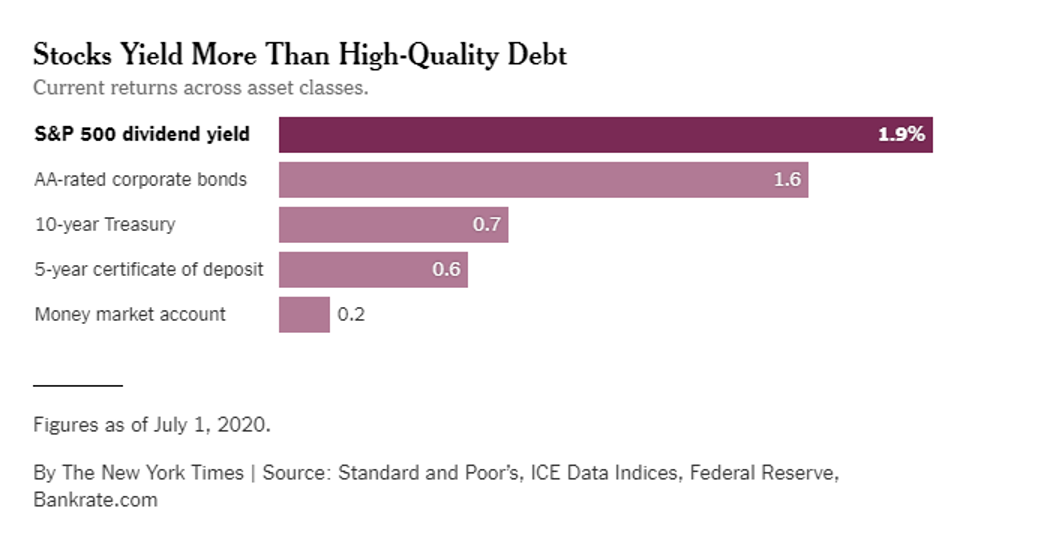 Coincidence or not, the day the Fed announced a massive injection of liquidity, the plunge in the market abated and the extraordinary recovery in stocks began. 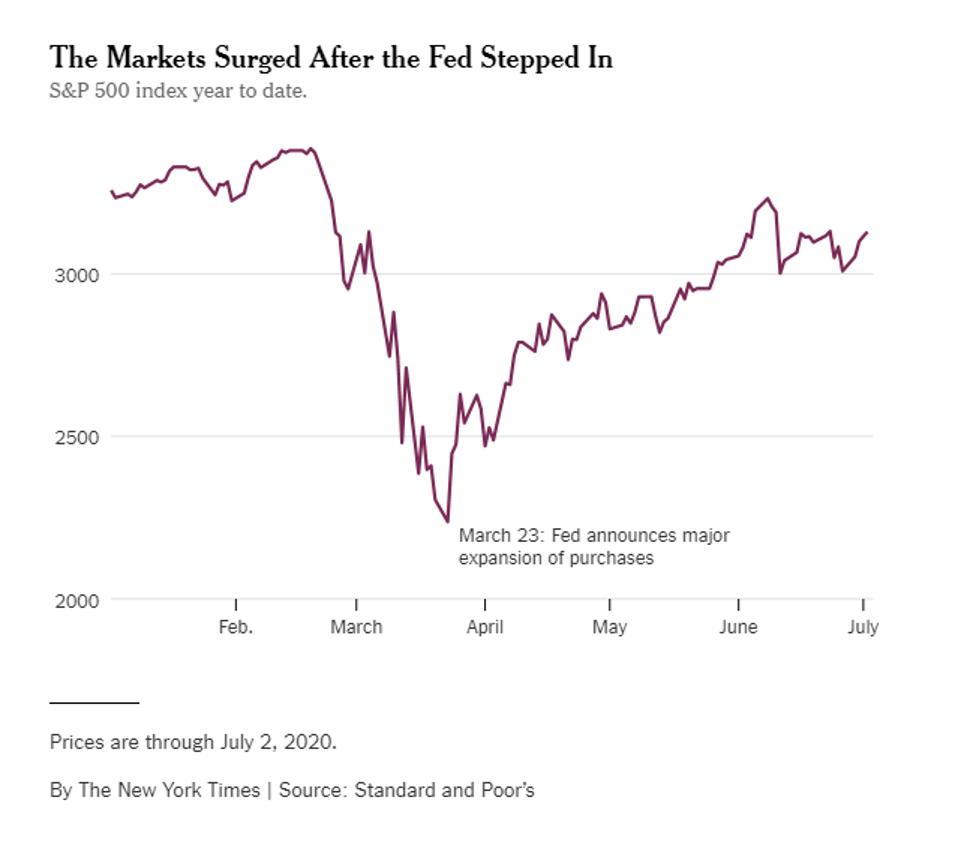 “Don’t fight the Fed” has been a mantra for investors for decades. During the tenure of Alan Greenspan as Fed chairman, the notion that the Fed would provide a fire hose of liquidity whenever a crisis threatened became known as the “Greenspan put.”

In fairness, the Fed is not the only factor influencing the market. Individual investors, known for their often poor timing of entry and exit points, have been trading actively, aided by commissions that major online brokers have dropped to zero.

That has created some weird anomalies: After pandemic losses drove Hertz shares below $1 and the company filed for bankruptcy, small investors piled in and sent the stock briefly above $5, even though shareholders rarely receive material proceeds from a bankruptcy.

However, as a whole, data on fund flows do not show — at least yet — enough new retail money coming into the market to materially account for its quick and strong recovery.

And the overall strong performance of stocks masks the fact that the market has recognized that profits of fast-growing technology companies have not been significantly hurt by the pandemic while more cyclical companies in manufacturing, retail and the like are suffering mightily.

Since the market peaked on Feb. 19, the tech-heavy Nasdaq index is up four percent essentially unchanged while the Dow Jones average — more oriented toward cyclical companies — has fallen by 12 percent.

Nonetheless, many legendary investors — from Stanley Druckenmiller to Paul Tudor Jones — remain deeply concerned about the gap between share prices and economic fundamentals. Warren Buffett, who made billions for his company, Berkshire Hathaway, by investing heavily during the financial crisis, appears to have mostly stayed on the sidelines.

In recent days, the market has seemed sympathetic to their view. As virus cases have begun spiking, stock prices have shuddered, as they did on Friday, June 26. But so far, at least, they have quickly stabilized, albeit below the highs of early June.

So at the moment, as much as President Trump would like to think otherwise, lofty stock prices are not a sign of a strong economy.

And in the long run, the view of professional investors that share prices must eventually align with economic fundamentals will prevail.

To me, those fundamentals look scary. The new climb in virus cases threatens to force shutdowns and delay reopenings. At best, the recovery is likely to be lengthy, particularly for industries including travel and hospitality.

Without a robust economy, corporate profits are unlikely to recover fully, eventually pulling down stocks. To know when that recovery might occur, keep a close eye on the path of the virus.

But also, don’t forget to watch the Fed.