Steven Rattner: The Year in Charts

A tour of the major trends, from Covid-19 spread to political polarization, that affected Americans this year.

If 2019 was the Year of Trump, then 2020 was the Year of Covid-19 and Trump. Only the most devastating pandemic in a century could have bumped our loudmouthed president into second place. That is, until Joe Biden also took him down a peg, in a free and fair election with an unambiguous result — except in the world of Trump. And oh yes, all of this occurred during the biggest recession since the Great Depression.

Not all of this year’s ugliness can be charted. In particular, the death of George Floyd certainly should be high on the list of what made 2020 so awful, and so should how President Trump abetted the tensions that have divided America. But that still leaves plenty of material for this, my ninth annual year in charts.

As early as January, experts at the World Health Organization told us the virus was coming. That was followed in March by eruptions in Italy, Spain and elsewhere. Yet we did little under the leadership of a president who kept telling us it would “go away.” Even after the coronavirus nearly brought the New York City area to its knees, the Trump administration responded feebly. Many parts of the country — particularly places where Mr. Trump remained popular — refused to take simple precautions like wearing masks.

By fall, the greatest country on earth led the developed world in total cases. More than 340,000 Americans have died, more than the number killed in combat in World War II. 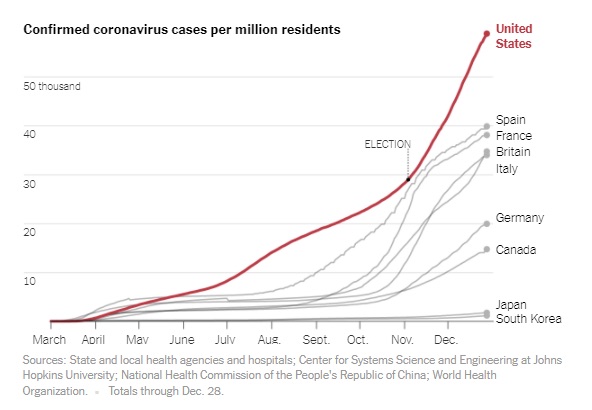 While the human toll remains paramount, the economic collapse was also vast. In just two months, more than 22 million jobs vanished, more than in any other postwar recession. While 12 million jobs have been added to payrolls since April, job growth has decelerated steadily since June. Just 245,000 jobs were added in November, and forward-looking indicators, like new claims for unemployment benefits, suggest the next monthly report, on Jan. 8, could show another loss. The climb back to the employment levels of early 2020 may take many years. 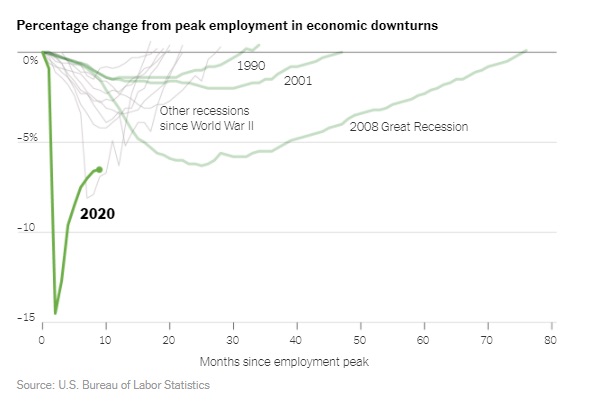 Recessions rarely spread their pain evenly, and that’s surely been true in 2020. Workers with less education, younger workers and people of color have been hit the hardest.

At the low point this year, 21 percent of Latinos had lost their jobs compared to 16 percent of whites. Similarly, 28 percent of those without high school diplomas became unemployed. And after years of gains, more women than men lost their jobs. This is all because job losses were concentrated in service industries, such as retail stores, restaurants and hotels, which employ a disproportionate number of these Americans. The stock market, meanwhile, notched double-digit returns, and the net worth of the wealthiest American, Jeff Bezos, has risen by $89 billion since March. 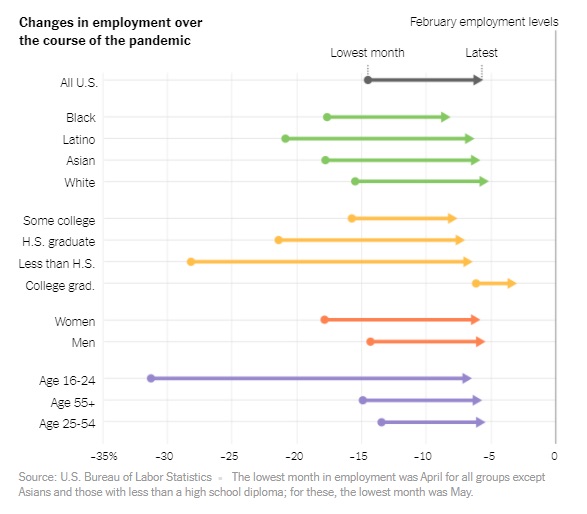 Amid all that, record numbers of Americans turned out to elect a new president. While Mr. Trump retained much of his white, working-class base, other parts of the electorate shifted enough to give Joe Biden a larger popular vote margin than Hillary Clinton achieved in 2016, enough to flip the Electoral College decisively. Mr. Biden made particularly big inroads among moderates and independents; he won 54 percent of independents, a swing of 17 percentage points from 2016. 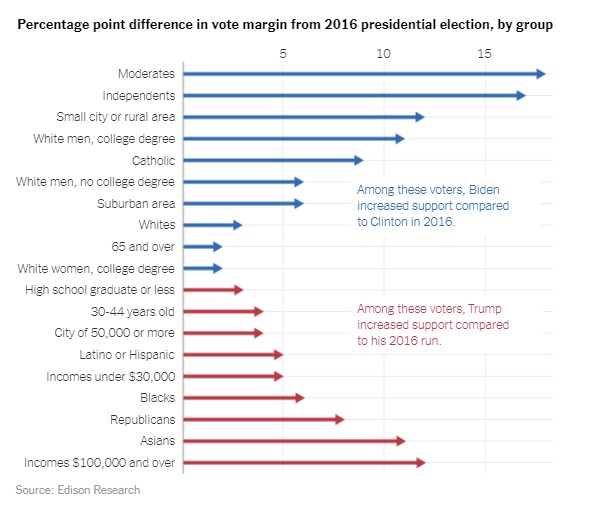 America’s increasing polarization seems to have become an article of faith. Regrettably, the facts support this worrisome shift. When George W. Bush won the presidency in 2000, 56 percent of the votes were cast in counties that were reasonably evenly split between Democrats and Republicans. This year, evenly split counties accounted for only 42 percent of the vote. Meanwhile, the percentage of votes in “ultrapartisan” counties, in which one party won by more than 60 percentage points, more than doubled, to 7 percent from 3 percent in 2000. 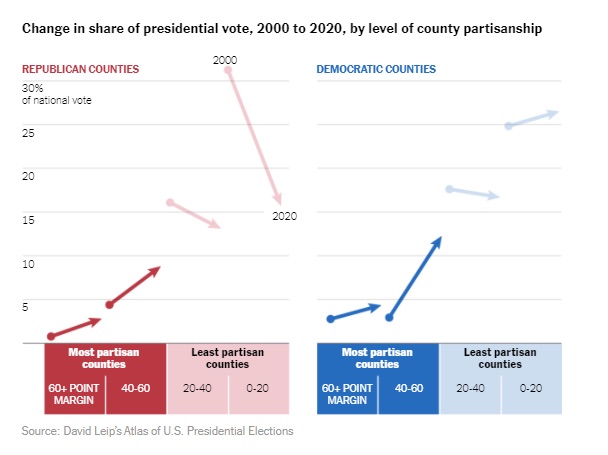 Below the top of the ticket, the news for Democrats was surprising and simply bad. The party managed to add just one seat in the Senate, with two Georgia races to be decided next Tuesday. In the House, Democrats have lost 10 seats so far with two races not yet called, a rare occurrence for a party whose candidate won the presidency. Once again, the polls fell short; many experts believed Democrats would win the Senate and gain seven or so seats in the House. Worse, the results suggest that the Democrats have a messaging problem; Republican claims that their opponents were socialists who wanted to defund the police and abolish private health insurance seem to have resonated. 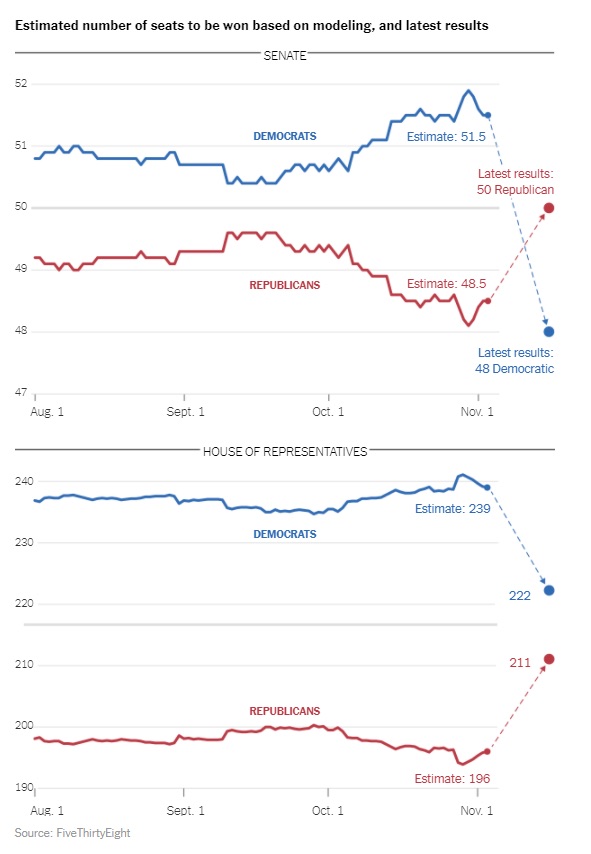 A year ago, Mr. Trump’s government by tweet seemed to have reached maximum velocity. But never underestimate his ability to take craziness to a new level. In 2020, his yearly total reached nearly 12,000, compared to 7,547 in 2019. On one day in June, he set a personal record of 200 tweets and retweets. In early October, he sent 42 tweets in just two hours while being treated for Covid-19. Along the way, the tone deteriorated. After the election, he pushed fringe views of election-rigging that were so devoid of any legitimacy that Twitter began attaching disclaimers to more of his messages. 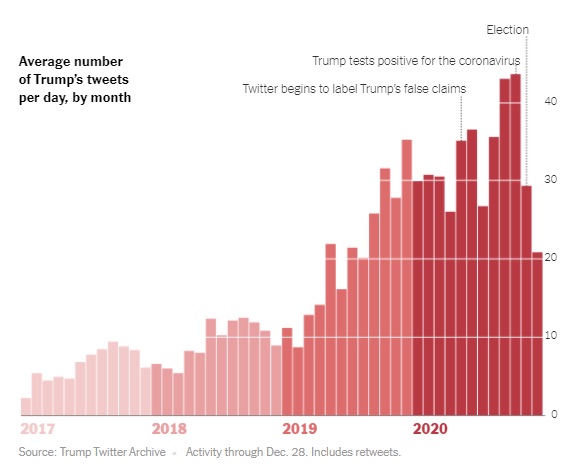 Tweets were just a part of the craziness of the Trump White House. Huge staff turnover was another. Of Mr. Trump’s 15 initial cabinet members, nine, so far, have not survived his term in office. In the White House, 59 of his 65 top aides have left, many of them before the end of Mr. Trump’s first year. That’s more than any other recent president. In certain positions, there was serial turnover; Mr. Trump has had six different communications directors and deputy national security advisers.

Amid the chaos, Mr. Trump managed to make a deep impact on the judiciary. As his term neared its end, he had put 234 judges with lifetime appointments onto the federal courts. That’s far more than Barack Obama managed in his first term and more than any other recent president. A full 30 percent of appeals court judges have been appointed by Mr. Trump, the largest first-term share in four decades.

And let’s not forget his three Supreme Court appointments, the most in one term since Ronald Reagan. Mr. Trump was aided in this effort by the Senate majority leader, Mitch McConnell, who streamlined the consideration process last year to allow more confirmations.

Judges are not Mr. Trump’s only legacy. Well before the coronavirus upended the economy, Mr. Trump had put the country on track for a return to trillion-dollar deficits, a terrible policy when unemployment was near record low levels. His administration promised that the 2017 tax cut would pay for itself; it never came close. He enabled huge spending increases. Then came Covid-19. 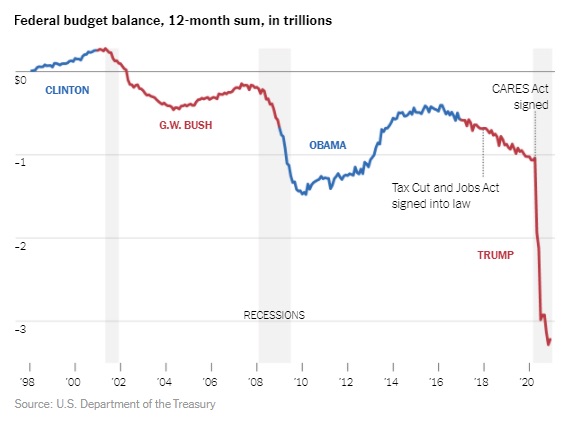 The resulting stimulus bills were essential to keeping the American economy together, but coming on top of an already huge deficit, the additional spending sent the nation’s ratio of debt to gross domestic product soaring past 100 percent for the first time since World War II. As with so much else, Mr. Trump is leaving this mess behind for others to fix.