On MSNBC’s Morning Joe today, Steven Rattner charted the nation’s shifting political climate in light of yesterday’s Republican gubernatorial victory in Virginia and strong showing in New Jersey, highlighting how Americans are once again shying away from big government, particularly as inflation becomes a major issue for the first time in decades.

A tight gubernatorial race in New Jersey and Terry McAuliffe’s loss in Virginia – a state that Joe Biden carried by 10 percentage points in 2020 – underscore the challenges that the Democrats face less than a year after returning to the White House. 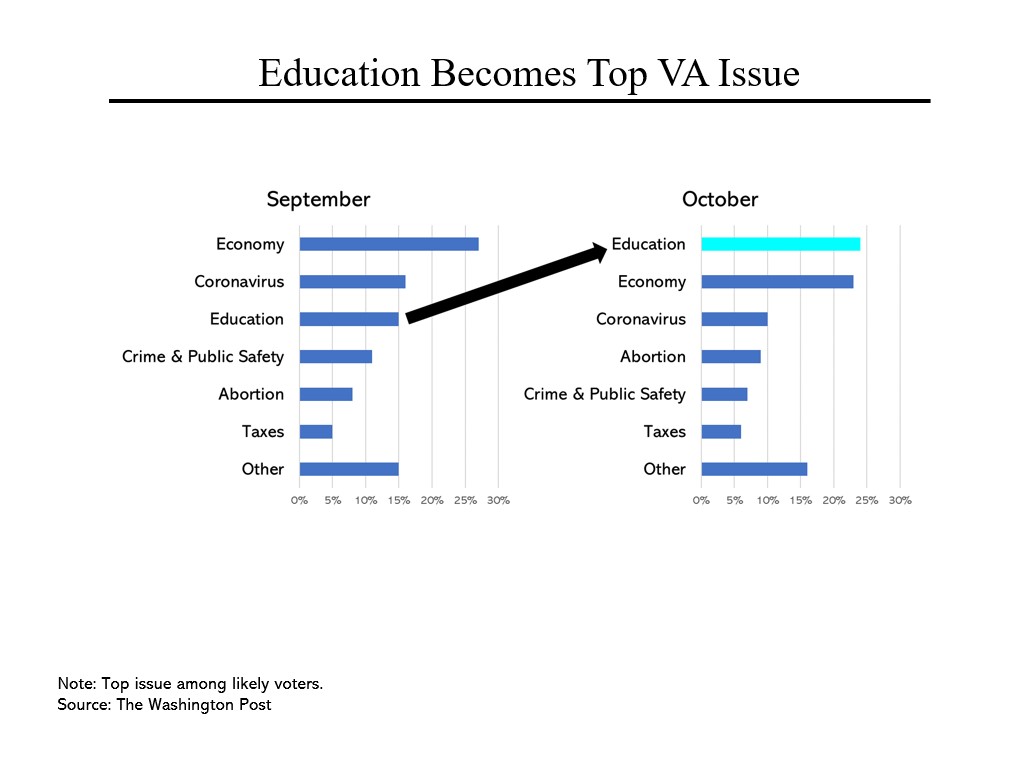 For starters, the Democrats have been bedeviled by a variety of social issues – from the role of policing to abortion rights. In Virginia, the battle was fought over education, so intensely that it moved from the third most important issue in the minds of voters less than two months ago to the most important issue by Election Day, ahead of the perennial favorite (the economy) and the most immediate challenge (COVID). For that, in large part, credit the victorious Republican candidate, Glenn Youngkin, who lambasted, for example, the notion of teaching critical race theory in the schools – even though it is not taught in Virginia’s schools. McAuliffe exacerbated his own challenges addressing this issue when he said that parents should not be telling the schools what to teach. Rather than walk his comments back after the ensuing uproar, McAuliffe instead clung to them, giving Youngkin even more ammunition. 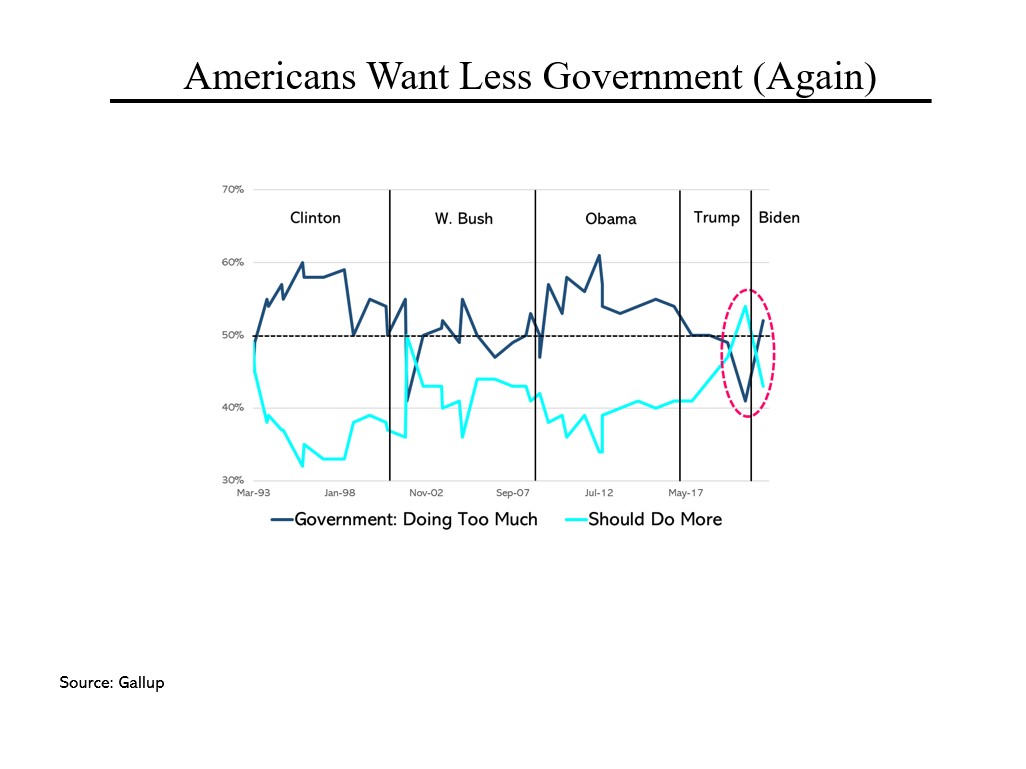 Both around education and other issues, a strong undercurrent in the Virginia race was differing views about the appropriate role of Washington in America. For decades – at least since Ronald Reagan’s triumph in 1980 – the prevailing sentiment has been in favor of less government. That has been particularly true during Democratic administrations. Only briefly, following 9/11, has a plurality of Americans expressed a preference for more government. But at the time of Biden’s victory, in the wake of Donald Trump’s disastrous presidency, by September 2020 a strong majority believed that government should do more. Unfortunately, the weak start of the Biden presidency – including the mistake of raising expectations of a transformational presidency despite razor thin majorities in Congress – has contributed to a complete reversal of opinions about how robust government should be. That, not surprisingly, played to Youngkin’s favor. 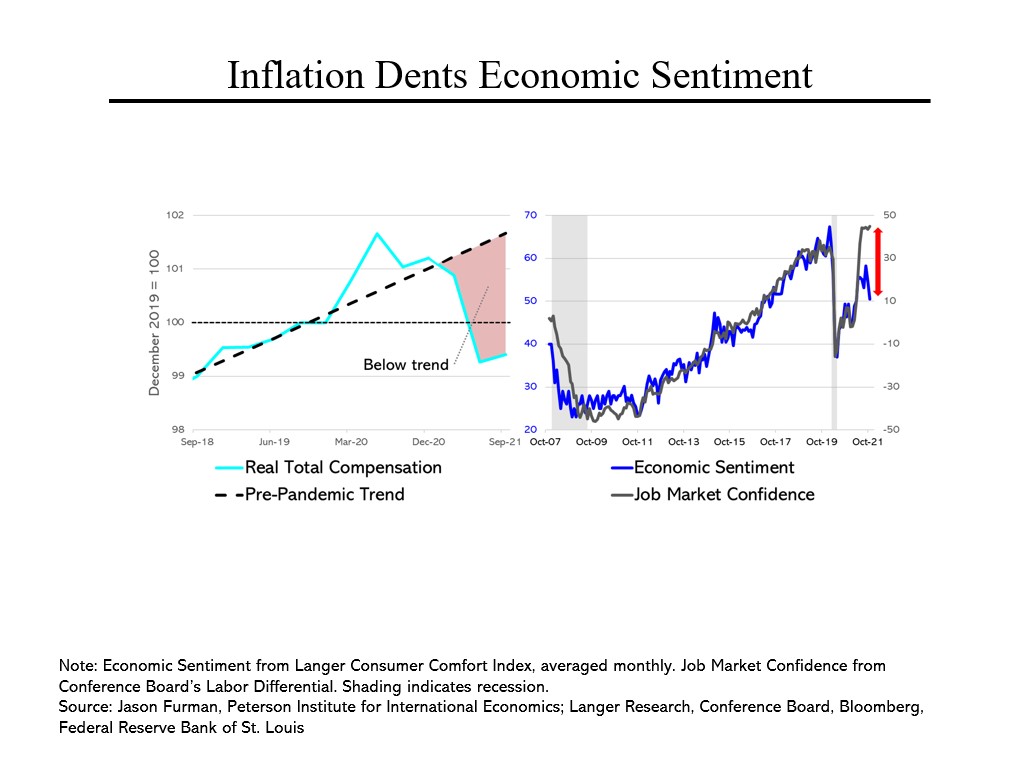 The economy may have ended up as the second most important issue in Virginia (essentially tied with education) but it doubtless played an important role. Nationally, inflation has recently become the number one economic concern of Americans – and for good reason. While nominal wages (i.e., before inflation) have been rising robustly, higher prices have more than eroded those gains. After a sharp rise in 2020, when prices were falling during the pandemic, real wages are back to where they were in March 2019.

Historically, the public appears to have equated a strong job market with a strong economy. That correlation has suddenly and sharply been broken, indicating that Americans are more concerned about their purchasing power than their ability to find a job. An October Politico/Morning Consult poll found that 89% of respondents were very or somewhat concerned about inflation while 63% held the Biden administration very or somewhat responsible. Similarly, roughly half of Americans polled in October by the Associated Press said they expected the economy to get worse while only 30% said it would likely improve.