On MSNBC’s Morning Joe today, Steven Rattner presented charts showing that while wage growth for the average worker has recently begun to decelerate, the typical lower-income worker has seen steady gains thanks in part to recent state and local legislation.

When the monthly employment numbers were released last Friday, the attention – as usual – was on the number of new jobs added. But each month, the Bureau of Labor Statistics also provides wage data; what is happening to the incomes of Americans is both concerning and instructive. While the headlines suggest that President Trump will have a significant tailwind from the economy, more attention to this data could swing public opinion. 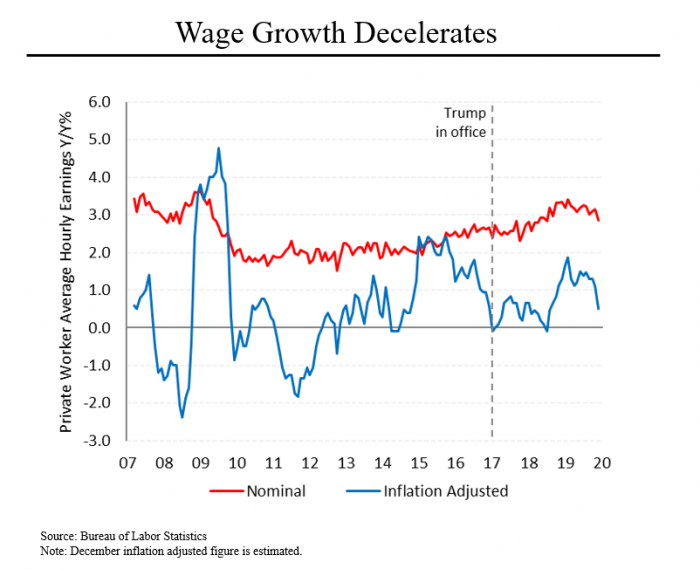 In terms of overall wage growth, the most recent numbers reinforce a recent and worrisome trend of significant deceleration. The red line shows what has been happening to “nominal” (ie., before adjusting for inflation) hourly earnings. After reaching a peak year-over-year growth rate of 3.4% in February, the rate of increase has slid back to 2.9%, giving back roughly half of the rise since President Trump took office.

Still more concerning is the blue line, what happens after adjusting for inflation. There the falloff is more pronounced; from a top of 1.9% in February down to just 0.6% last month. In other words, the purchasing power of the average American is barely growing. 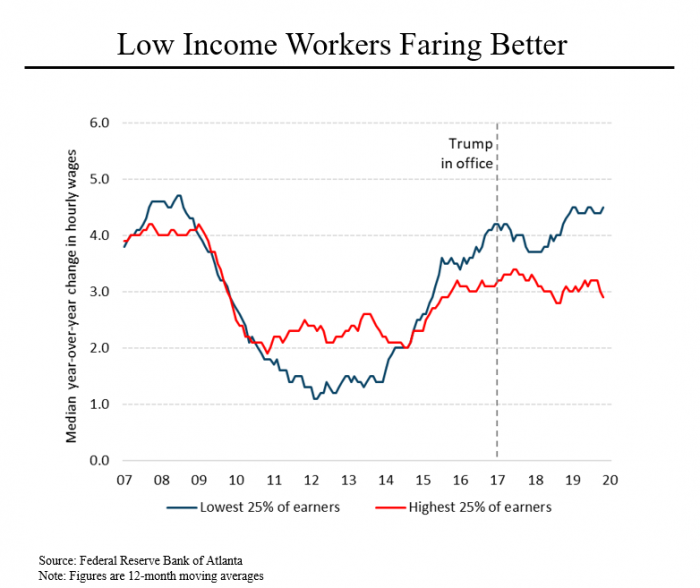 Interestingly – and contrary to general impression – a disproportionate share of these wage increases has gone to the bottom 25% of Americans. As of November (the most recent data available) their incomes are now rising at a reasonably robust 4.5% rate (before adjusting for inflation.) Meanwhile, the other 75% of workers have seen their pay increases stagnate at a 2.9% rate of growth. So in that one respect, we have begun to make a dent in income inequality. 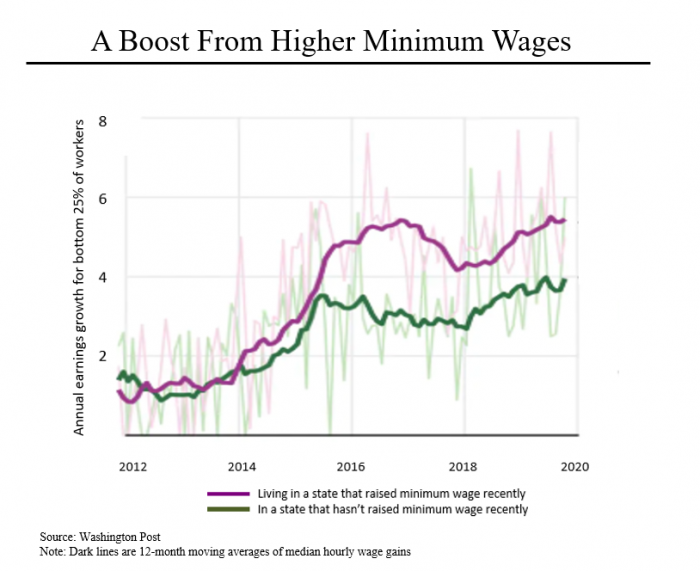 Why is that occurring? Part of it relates to the tight labor market and the need for employers of low-skilled workers to raise what they pay. But a significant portion stems from minimum wage increases. In the roughly 20 states where the minimum wage has been increased over the past three years, pay is rising at about a 5.75% rate; in states that didn’t, pay is growing at around a 4% rate. So, indeed, the minimum wage does have an effect on what people near the bottom earn.

According to one estimate, that brought the country’s “effective” minimum wage to about $11.80 per hour in 2019. And more help is on the way. On January 1, 22 states increased minimum wages, either to adjust for inflation or as a result of legislative action. Meanwhile, Washington remains on the sidelines. The federal minimum wage of $7.25 per hour hasn’t been increased since 2009.