Almost without warning, economic signals are starting to flash yellow and in some cases, red. For that unwelcome development, hold President Trump’s war on trade heavily accountable. His erratic performance at the economic steering wheel has caused growth in global trade to slow sharply while expansion in manufacturing has nearly evaporated, in part because of the uncertainty over our economic policies. 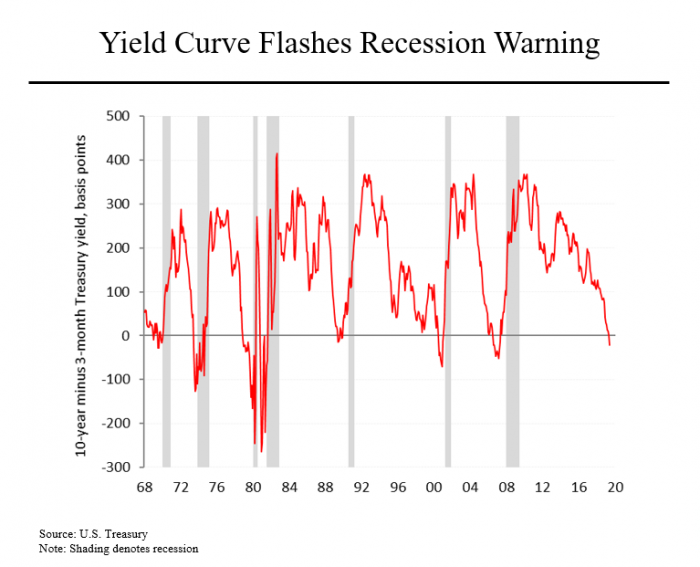 As one vivid indicator of the economic risks that have begun to appear, consider the state of the yield curve, the difference in interest rates between the government’s shorter term debt and its longer term debt. Normally (and logically), the government pays more to borrow for longer periods of time, just like a homeowner selecting a mortgage. But when recessionary worries emerge, this relationship can reverse. It did so seven times over the past 50 years and in every case, a recession soon followed.

And now it has done so again. The government’s three month debt currently yields 2.3 percent while is 10 year debt fetches slightly less, 2.1 percent.

Why does this happen? In large part because when investors get scared, they rush into our debt, depressing yields. An added factor in this cycle is the fear of deflation; if you’re worried that prices might go down, locking in even a 2.1 percent rate for 10 years can seem attractive. 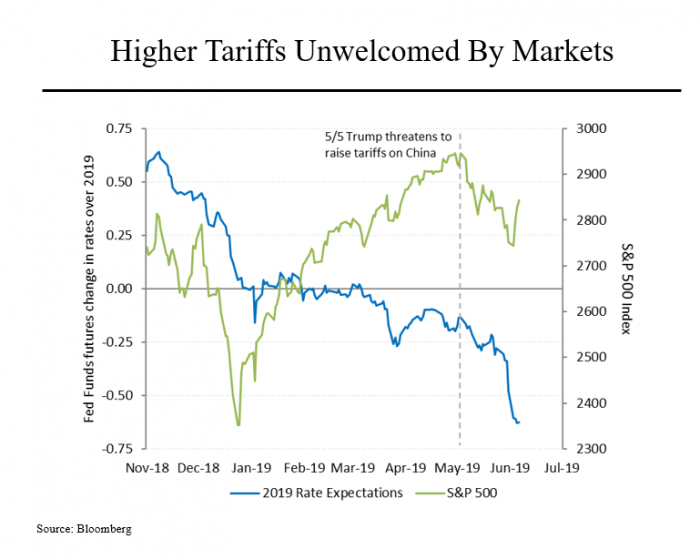 Certainly a major factor in the current economic uncertainty is Mr. Trump’s trade war. As this chart shows, the stock market effectively peaked a month ago when the president announced his expanded tariffs on imports from China. From its May 3 peak, the Standard & Poor’s index fell by 3.5 percent. (The recent rebound is due to the Fed signaling that it might cut interest rates.)

A cut in rates is what the market is both demanding and expecting. The blue line shows that last November, less than a year ago, the market was expecting rates to go up by more than half a percentage point in the course of 2019. Now, the market is expecting rate cuts of almost exactly the same magnitude. At present, there is a 70 percent probability that the Fed will cut rates no later than its July meeting. 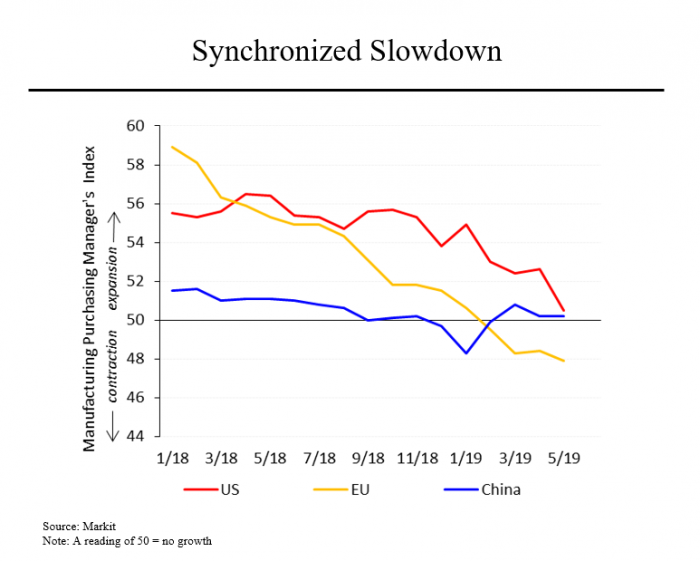 Partly as a result of Mr. Trump’s actions, economists have been reducing significantly their estimates for global growth. Just this week, the World Bank projected that global growth this year would total 2.6 percent (compared to 2.9 percent in its last projection, six months ago.) The report highlighted marked weakness in trade and manufacturing as well as slower investment growth and a decline in confidence.

Other economic measures are also showing weakness. This chart shows activity among purchasing managers in the manufacturing sector. A reading below 50 indicates contraction. As is evident, the United States is slowing rapidly and is at its lowest level since 2009. (Indeed, economists expect our second quarter growth rate to be only 1.1 percent, down from 3.1 percent in the first quarter.)

China has been struggling for several months, in part due to Mr. Trump’s tariffs and despite substantial government stimulus. And Europe’s manufacturing activity (which includes production and exports of luxury cars to China) is contracting.