Morning Joe Charts: MAGA Has Yet to Reach America’s Factories

On MSNBC’s Morning Joe today, Steven Rattner presented charts showing that President Trump has failed to achieve two of his principal economic goals – shrinking the US trade deficit and revitalizing the manufacturing sector.

As Donald Trump’s presidency approaches the two year mark, new data issued last week shows that he has made little progress in achieving two of his principal economic goals: restoring manufacturing’s role in the economy and curbing the nation’s growing trade deficit, particularly with China. 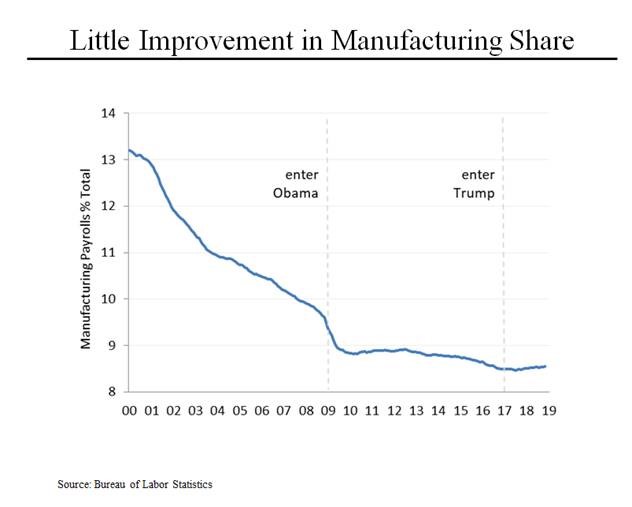 Friday’s jobs report provided further confirmation that the promise to Make America Great Again has yet to reach America’s factories. Yes, the number of manufacturing jobs has increased as the overall economic expansion rolls on. But no, the share of factory jobs as a percent of overall employment has not risen materially since Mr. Trump took office. The failure to improve the fortunes of manufacturing was starkly illustrated two weeks ago when General Motors announced plans to shutter four plants and slim its employment rolls by nearly 15,000 workers.

Manufacturing has, of course, been on a steady decline in its importance for many decades. Twenty years ago, it represented 14 percent of all jobs. Today, close to its nadir, it constitutes just 8.5 percent of employment. And while the nearly 13 million manufacturing jobs that currently exist represents a noticeable improvement from the 11.5 million that existed in early 2010, in 2000, we had more than 17 million jobs in factories. 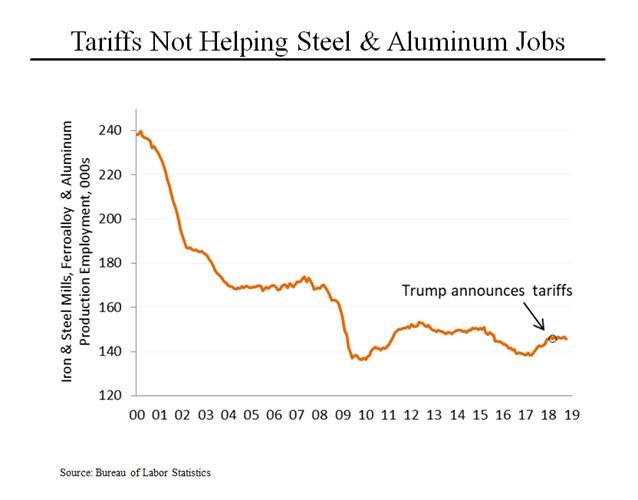 Nor has another of Mr. Trump’s initiatives – protecting domestic steel and aluminum production – shown much success. As Friday’s jobs numbers indicated, jobs in the iron, steel and aluminum production sector have remained roughly constant over the past year at about 146,000 workers. That leaves jobs in those industries well below where they were between 2012 and 2015, not to mention where they were prior to the financial crisis or the 240,000 jobs that existed in 2000. 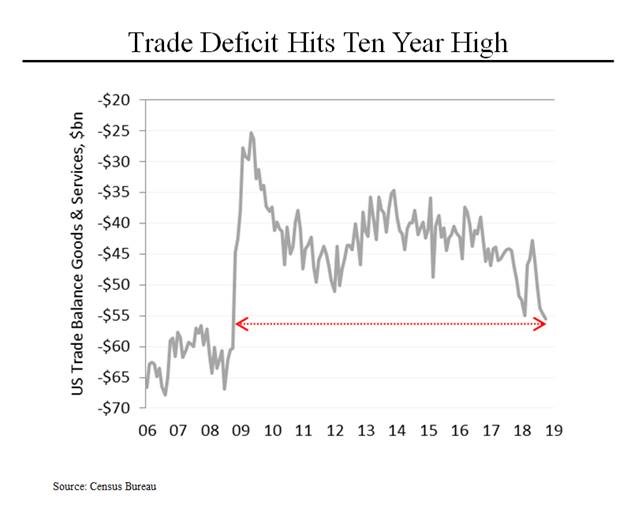 Nor has Mr. Trump been any more successful in addressing the nation’s trade deficit, which hit a 10 year high of $55.5 billion in October, according to last week’s release. As usual, trade with China was the largest component of the problem, representing about half of the gap.

No doubt, some of that increase reflected American companies stocking up on Chinese goods in anticipation of higher tariffs. But it also reflected a dramatic slowdown in Chinese purchasing of American soybeans, in favor of those from Brazil. Soybeans are America’s largest agricultural crop and with exports down more than 40% over last year, soybean prices are hurting.

Of course, a trade deal with China would provide some relief but the fact remains that there is little evidence of a fundamental change in the negative direction of our trade balance.